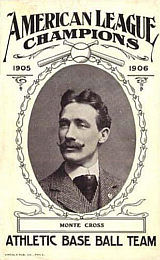 “Why would I want a new shortstop with Monte Cross in that position? Cross has forgotten more base ball than three-fourths of the players of today know.” - Connie Mack, 1904

Monte Cross played fifteen years as a no-hit, good glove shortstop, straddling the line between the 19th and 20th centuries. Although his bat was never particularly potent, his struggles are due in some extent to playing in a dead-ball era. Cross added to his value with an ability to draw walks and to steal bases. Much like his contemporary, Lave Cross (no relation), he spent the majority of his big league days in Philadelphia.

Monte arrived initially with the old Baltimore Orioles, failing to make good in a 15 game look in 1892. He returned with an offensive explosion in 1894 for Connie Mack on the Allegheny River (.442/.520/.837 with five triples in 43 at bats). He played a full season with the Pirates in 1895 before spending the next two seasons with the St. Louis Browns, a team he had specifically asked to not be moved to. He clashed with management on several occasions in his first season but became a valuable commodity in his best full-time offensive season (.286/.376/.396 in 132 games in 1897). With the Browns moving everything not bolted down for cash infusions, Monte moved to the Philadelphia Phillies for 1898. He spent his final ten seasons with Philadelphia-based teams.

Over the next four seasons, Cross scrapped for the Phillies, striking out a lot for the time and place (his 575 strikeouts in his final ten seasons was unmatched) but playing a strong, if occasionally erratic, shortstop. He hit the first home run of the 20th century on April 19, 1900, a three-run shot on the way to a 19-17 victory over the Boston Beaneaters. But his bat was never that electric with any regularity and he was routinely chastised in the press for his poor showings. He bottomed out with a .197/.281/.236 line in 1901. On the field, though he led in errors three years, he also led in putouts with solid range factors. Prior to the 1902 season, Monte bolted to reunite with Connie and his Philadelphia Athletics. As many teammates were slapped with injunctions for playing in the AL, Monte's poor 1901 allowed him to slip away undetected, playing semi-regularly for the next six seasons. His tepid bat got him benched twice for younger options, in 1905 and 1907, but he was a starter on the 1902 pennant winning club, scoring 72 runs. He petered out following the '07 season, batting .206/.316/.282 in 77 games.

After his big league tenure, Cross was a minor league player-manager with two teams: the Kansas City Blues from 1908 and 1909 and the Scranton Miners from 1910 to 1911. In 1913, he finished the season as the non-playing manager of the Bridgeport Crossmen in the Eastern Association. In 1914, he was an umpire in the Federal League. Cross was next the head coach at Maine from 1916-1921. After baseball, he worked as a clothing salesman for Gimbel's Department Store in Philly, dying of a heart attack in 1934.

This manager's article is missing a managerial chart. To make this person's article more complete, one should be added.
Retrieved from "https://www.baseball-reference.com/bpv/index.php?title=Monte_Cross&oldid=1255882"
Categories: