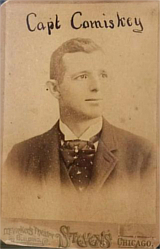 Charles Comiskey was a speedy first baseman and pennant-winning manager best remembered as the founder and longtime owner of the Chicago White Sox. Comiskey played a pivotal role in the early success of the American League, but was marginalized by a feud with long-time AL president Ban Johnson and the Black Sox Scandal.

Comiskey was the son of Chicago alderman "Honest John" Comiskey. The senior Comiskey disapproved of his son's interest in baseball and tried several tactics (including sending him to college and getting him an apprenticeship) to prevent him from playing. But his interest never waned, and he jumped at a chance to play for a team in Dubuque, IA. He moved to the St. Louis Browns when they joined the new American Association in 1882.

Although he was not much of a hitter, Comiskey was regarded as a premier defensive player. He has sometimes been credited with creating modern first base play by ranging far from the base and forcing the pitcher to cover the bag. While this reputation is probably overblown - other first basemen played similarly - the statistical record shows that his Browns teams were ahead of the league in adopting the style. Not much of a hitter (.264/.293/.337 in thirteen seasons), Comiskey did rack up at least 416 stolen bases (four seasons no record are found), including 117 in 1887.

At the ripe old age of 25, Browns owner Chris Von der Ahe made Comiskey player-manager of the Browns in 1885; Comiskey proved his worth with four straight AA pennants. Under Comiskey and Von der Ahe, the Browns were the epitome of the rowdy AA style; Von der Ahe egged on his drunken fans until opposing teams were terrified to play in St. Louis. Though that might have provided the Browns with a home field advantage, they were plenty good enough to win on the road as well. The Browns' top pitchers, Dave Foutz and Bob Caruthers, were both outstanding hurlers, and good enough batters that Comiskey could play them in the field when they were not on the mound. Third baseman Arlie Latham was a questionable fielder but a competent hitter and one of the most feared baserunners in the league. Second baseman Yank Robinson was a pioneer in getting on base via the walk. And left fielder Tip O'Neill was a stellar hitter, winning the Triple Crown in 1887 and earning the distinction of being the only player to lead his league in doubles, triples, and home runs in the same season.

The Browns' fortunes began to wane as Von der Ahe sold off one great player after another, and their 1888 pennant proved Comiskey's last as manager. The 1889 club went down fighting to Brooklyn, which was now home to former Browns' greats Foutz and Caruthers. The following season, Comiskey joined many other players in jumping to the new Players League, where he managed the team in his native Chicago to an unspectacular fourth place. He also umpired one game that season. After the dissolution of the Players League, he returned to the Browns for another second-place finish and then to the Cincinnati Reds for three seasons of declining fortunes and playing time, hanging up the spikes after the 1894 season. 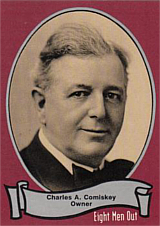 Comiskey recognized that his time as a player was up and decided to continue in baseball as a minor league owner. He bought the Sioux City, IA franchise in the Western League and moved it to St. Paul, MN. His choice of the Western League was undoubtedly driven by his friendship with Western League president Ban Johnson, whom he had met in Cincinnati. When Johnson renamed the league the American League in 1900, Comiskey was allowed to move his team to Chicago, where they were rechristened the "White Sox" in honor of the old Chicago White Stockings. The Sox beefed up their lineup by signing players who lost their jobs when the National League contracted from 12 to 8 teams after the 1899 season. Contraction provided an opportunity for Johnson, Comiskey, and the AL. After the 1900 season, the league claimed major league status for the following year. The AL began raiding NL rosters, capitalizing on the same player resentment that fueled the Players League rebellion a decade earlier. Comiskey's White Sox were not the most aggressive raiders, but they did turn up some fine players in Clark Griffith, Nixey Callahan, and Fielder Jones, all of whom served as player-manager in the Sox's first decade. The club took home the inaugural AL pennant.

With the still astute Comiskey at the helm, and solid finances from playing in the nation's second city, the Sox remained competitive. They were in the thick of the pennant race every year from 1905 to 1908, and won the pennant and World Series in 1906. Following the hectic 1908 race, the Sox sank into the doldrums for the next six years. They were never really terrible in that span, but they were never seriously in the race for first place, either.

The Sox began rebuilding, both figuratively and literally. In 1910, they moved into Comiskey Park, which remained their home for more than 80 years. The new park favored an approach based on pitching and defense, probably reflecting design contributions from Sox pitching stalwart "Big" Ed Walsh. In 1912, Comiskey added three long-term contributors in pitcher Eddie Cicotte, catcher Ray Schalk, and shortstop (later third baseman) Buck Weaver. In 1914 they added another key pitcher, spitballer Red Faber, of whom Comiskey was so fond, he named a moose after. Comiskey completed the core of the next great Sox team in 1915 with three more additions: second baseman Eddie Collins, purchased in the off-season when Philadelphia Athletics manager Connie Mack was unwilling to meet his Federal League-inflated contract demands; center fielder Oscar "Happy" Felsch; and mid-season acquisition, left fielder "Shoeless" Joe Jackson. Driven by this solid core of talent, the Sox vaulted back into contention, finishing third with a 93-61 record. Their record dipped in 1916, but they finished just two games behind the AL champion Boston Red Sox. They finally broke through in 1917, charging to the AL pennant and a 4-2 victory over the New York Giants in the World Series. 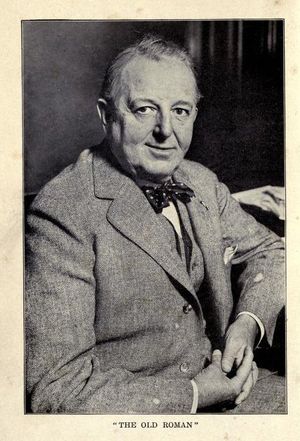 The team took a nosedive in the war disrupted 1918 season. Jackson played just 17 games before taking a job in a shipyard, nominally as a draft exempt war plant worker but actually as a ringer on the company baseball team. Faber was drafted and the rest of the pitching staff went into a collective funk. The team slumped to 57-67, good for only 6th place, and attendance collapsed from nearly 700,000 to just under 200,000. 1918 was a financial disaster for baseball as a whole, and for the Sox especially. With the 1919 season uncertain, Comiskey retrenched, cutting expenses wherever possible. Salaries were the most obvious expense, but no area avoided scrutiny. Although recent research has disputed the claims, contemporaries said that he even billed the players for laundering their uniforms, leading the team to be nicknamed the "Black Sox". The nickname soon took on a more sinister meaning. Despite these off-field issues, the Sox rebounded. With Jackson and Faber back, they returned to first place, finishing 3 1/2 games ahead of the Cleveland Indians.

Unfortunately, Comiskey's retrenchment had exacerbated tensions within the team. The team was already divided into factions, one led by Collins and one by Jackson and Cicotte. At $15,000 per year, Collins was by far the best paid player on the team, but he was protected from salary cuts because he had a five-year contract. Schalk, another member of Collins's faction, was likewise protected. In contrast, most of the members of the Cicotte/Jackson group were less well paid to start with and still suffered the brunt of the salary cuts. When they were presented with an opportunity to throw the World Series for $100,000, members of the faction jumped at the chance, triggering the Black Sox Scandal. The dirty players successfully threw the Series, played against the Cincinnati Reds, without being obviously detected, and the core of the team remained intact for the 1920 season. However, Comiskey was aware something was up and hired private investigators to make the suspected players talk, even offering a $10,000 reward to anyone who could substantiate claims of untoward activities during the Series, but all unsuccessfully. The Sox remained in the hunt for the pennant for the whole season, but in the closing phase of the season their dishonesty was made public, when Cicotte confessed to a grand jury that he had accepted a payment of $10,000 to throw the Series. Newly appointed Commissioner Kenesaw Mountain Landis banned the eight accused players, and the Indians squeezed past the now gutted Sox to take the flag.

Perceptions of Comiskey's role in the scandal have changed over time. Contemporaneous accounts were favorable, undoubtedly because he vigorously courted the press. He was presented as betrayed by his ungrateful players and left with a gutted team. This picture was upended by Eliot Asinof's classic book on the scandal, Eight Men Out, which portrayed Comiskey as setting the stage for the scandal with his penny-pinching salaries and failure to deal with the deep divisions within his team. Asinof also showed that Comiskey knew about the fix as it unfolded and tried to cover it up after the fact in order to avoid losing the core of his team - his hiring of detectives and posting of a reward was just empty posturing to cover his tracks. This version of Comiskey was further exaggerated in John Sayles's film version of the book, where he was portrayed by Clifton James. Some more recent works have softened this criticism, pointing out the Sox's real financial problems and attempting to refute claims that the Sox were underpaid by contemporary standards.

Whatever his culpability, the scandal effectively finished Comiskey as a force in baseball. The Sox still had a number of fine players, including future Hall of Famers Collins, Schalk, and Faber, but Comiskey failed to aggressively find new talent to fill the holes left by the banned players. Instead, the Sox drifted, rudderless and remained in the second division for the remainder of Comiskey's life. He died in 1931, with his son, J. Louis Comiskey inheriting ownership of the club. His son-in-law, John Schorling, was a Negro League owner and executive. In 1939, Comiskey was inducted into the Hall of Fame.