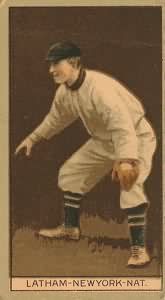 Arlie Latham was well-known as The Freshest Man on Earth. At the same time, he was a long-time major leaguer with a 17-year career, mostly at third base. His 742 stolen bases put him (as of 2009) at # 7 on the all-time list, and the most similar player (according to the similarity scores method) is Hall of Famer John Ward, although Ward's fame is partly also based on his pitching and managing.

Latham spent most of the first half of his career with the 19th Century St. Louis Browns of the American Association, a team which won several pennants and played in the post-season. The second half of his career was in the National League, mostly with the Cincinnati Reds.

In spite of playing most of his major league career far from the East Coast, he was born in New Hampshire and died in New York. The SABR biography of Latham says that he played amateur ball on a local team beginning at age 14. Latham was a character who got into many fights but was primarily a jokester. After his playing days he coached for the Reds in 1900 and the New York Giants in 1909 and 1911. He was also an umpire in the minors and in the National League in 1899, 1900 and 1902, working a total of 130 games. He spent many years in England teaching the British to play baseball, and then returned to the U.S. to run a delicatessen.