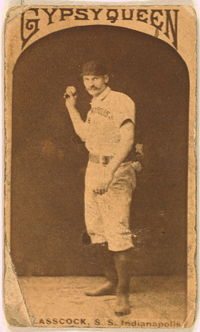 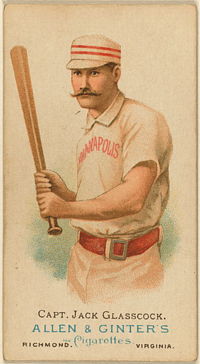 ". . . one of the great infielders when baseball was young . . ." - from Jack Glasscock's New York Times obituary

"Up to the present day but one man comes anywhere near (famous shortstop George Wright) in ability, and that is the great young player, Glasscock . . ." - Tim Murnane, writing in Sporting Life, March 23, 1886

Pebbly Jack Glasscock was one of the major stars of the 19th Century. His 7,000+ major league at-bats in that century were exceeded by only a handful of players. Primarily a shortstop, he was an above-average hitter and fielder who led the National League in batting average in 1890.

According to the similarity scores method, the most similar player is another 19th Century perennial, Deacon White. There are two Hall of Famers on Glasscock's list of most similar players, those being Dave Bancroft and John Ward, although Glasscock was clearly a stronger hitter than either of them.

He spent part of 1884 in the Union Association, hitting .419. If he had had enough at-bats, he would have led the league. As it was, his .419 average was far above the team average of the 1884 Cincinnati Outlaw Reds, who hit .271. On the other hand, he spent most of the season in the National League, where his .249 average was just ordinary.

He was player-manager in the National League in 1889. He is given credit for finding Amos Rusie pitching in semi-pro ball locally, and signing him for the Indianapolis Hoosiers. He also briefly managed the St. Louis Browns in 1892.

He worked in construction as a carpenter after his playing days and died at age 89. His cemetery plot had to be moved in 1964 as a highway was to be built in the area.

". . . one of the greatest players from a fielding standpoint the game has ever known. . ." - from The National Game