Note: This page links to George Wright, the Hall of Fame infielder and manager. For others with the same name, click here. 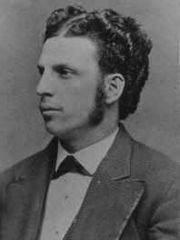 "(He covers) more ground than any other player in the country." - a New York newspaper, about George Wright

"I have never seen such work as George Wright did in those days, playing shortstop. . . All his qualifications taken together, he was really in a class by himself . . ." - Jim O'Rourke, reminiscing in 1915

George Wright was an early baseball star who played cricket and started playing baseball in 1863, although he never gave up cricket. His father, Samuel Wright, an immigrant from England, had been a cricket player over there and worked to make the sport more popular in his new home, teaching it to his sons Harry Wright and George. George later recalled that he had seen his first baseball game in 1857 at the Elysian Fields in Hoboken, New Jersey, which was where his father and older brother played cricket.

He was already a big star by 1869, having played for the (nominally amateur) Washington Nationals and the Unions of Morrisania. In these early years of professional baseball, he moved often from team to team, taking advantage of the fact many teams were willing to pay good money to have a top-rank player in their line-up. He then became the undisputed star of the legendary 1869 Cincinnati Red Stockings team that went 57-0, beating all of the top teams in the country. The Red Stockings, who were managed by his brother, were instrumental in making professional baseball popular, and their success led to the formation of the first professional league, the National Association of Professional Base Ball Players, in 1871. For his part, George devised a new way to play shortstop, lining up not on the direct line between second and third base, as his predecessors had, but deeper in the infield, as his arm was strong enough to still throw out baserunners at first base, while covering infinitely more ground from the deeper position.

Ironically, when the new National Association was formed, Cincinnati decided to return to amateur status. Harry Wright received an offer from Boston, MA to set up a professional team there, and did so while also luring some former Red Stockings players like George and Cal McVey, and other top players from around the country like Al Spalding and Ross Barnes. The Boston Red Stockings were the top team in the country now, but they lost the initial National Association pennant because George missed two months of action due to a broken leg. He came back however to lead the team to the championship in the next four seasons, including a superlative year in 1875 when Boston ran away with the title with a record of 71-8. The Bostons then joined the new National League in 1876, and while he was declining as a player, he was a member of two more pennant winners. He then moved to the Providence Grays as a player-manager for one year (1879) and won the pennant. In 1884, he was the owner of the Boston Reds in the short-lived Union Association.

Starting in 1871 and continuing after his baseball days, he ran a sporting goods house which became the sporting goods company Wright & Ditson. The company bought the pattent for the first catcher's mask, then diversified into importing and manufacturing equipment for other sports, including golf, ice hockey and tennis, all of which George helped to popularize. In fact, he was also instrumental in establishing golf in the United States, laying out the first golf course in New England, and was called "the father of American golf" when he died. Two of his sons became tennis champions.

He was elected to the Baseball Hall of Fame on December 7, 1937 by the Centennial Commission, among a group of five men better known for their exploits off the field. This made some people speculate that the Commission had meant to elect his brother Harry, who was most famous as a manager and organizer than as a player, and not George. In any case, the honor was well deserved and Harry would be elected as well a few years later. Another brother, Sam Wright also played major league baseball.

He is believed to be only player to play both major league baseball and first-class cricket. He continued to play cricket for many years after he had retired from baseball and was considered the best bowler in the U.S. He captained a team of Americans who defeated the top cricket players in England during an exhibition match in London in 1874, in large part thanks to his superlative bowling. [1]. [2]

When baseball became a demonstration sport in the 1912 Olympics, Wright served as the umpire.

This manager's article is missing a managerial chart. To make this person's article more complete, one should be added.
Retrieved from "https://www.baseball-reference.com/bpv/index.php?title=George_Wright&oldid=1151063"
Categories:
Hidden category: