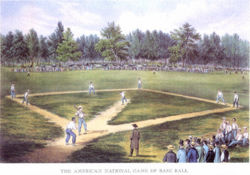 The Elysian Fields was a location in Hoboken, New Jersey, where the earliest games of baseball were played. Whereas New York City was already built up, New Jersey still had some open space in the 1840's, and so the young men that played baseball came there.

Amateur players continued to play there after baseball became established elsewhere. George Wright said that he saw his first baseball game there in 1857.

Another view from 1859.
Retrieved from "https://www.baseball-reference.com/bpv/index.php?title=Elysian_Fields&oldid=589374"
Category: