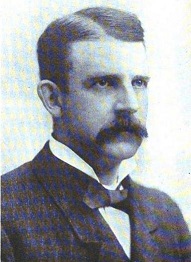 "Two hours is about as long as any American can wait for the close of a baseball game, or anything else for that matter." - Al Spalding

Al Spalding was a formidable pitcher and baseball pioneer who became more powerful when he started the sporting goods firm that bore his name. In that role, he had an impact on the game that continues today. In the early part of the 20th century, he helped to convince the world, erroneously, that Abner Doubleday had invented the game of baseball in 1839.

Spalding began his career around age 17 before professional ball existed. He was lucky enough to live in Rockford, IL, a hotbed of early baseball, and joined the Rockford Forest Citys, where he made a name for himself. He especially earned attention when he beat the famous Cincinnati Red Stockings in 1870.

He became utterly dominant in the first professional league, the National Association, where he led the league in wins during all five years of its existence. When the National League started in 1876, he led the league in its first year as well. He also managed a couple of years, winning the league's first pennant. After retiring as a player, he worked in the front office of the Chicago White Stockings, and eventually became the team's owner. As such, he had a long relationship with Cap Anson, with whom he eventually had friction when Anson was fired as manager in 1897, after serving in that capacity for nearly 20 years. In 1889, he arranged for the White Stockings to go on a world tour, playing exhibition games against a team of National League All-Stars all around the globe in order to boost the game's popularity.

Spalding started his sporting goods store in Chicago, IL with his brother Walter Spalding in 1876, and eventually had stores all over the country, becoming a leading manufacturer of baseball and other sports equipment and making him a millionaire. In particular, the rubber Spalding ball, known colloquially as a spaldeen was the standard for games of stickball in New York City in the 1940s and 1950s. The Spalding Brothers Company also published one of the earliest baseball guides.

He moved to San Diego, CA in 1900 after marrying his second wife, Lizzie Churchill Mayer, whom he had known back in Rockford, and was now established on the west coast as a prominent member of the Theosophic Society whose national headquarters were in the city's Point Loma neighborhood. Spalding quickly became involved in various civic activities, including serving as vice-president of the organizing committee for the 1915 International California-Panama Exhibition, which played a major role in shaping the city, for example by creating Balboa Park. In 1910, Spalding made a bid to become U.S. Senator from California, but lost narrowly and embittered by the experience, quit many of his civic positions, including his post of Vice-President for the upcoming exhibition. In 1911, he wrote America's National Game, described by historian David Nemec as the first serious history of baseball. He also pushed for the creation of the Mills Commission designed to establish the origins of baseball in 1907, and backed its spurious theory that the game had been invented in Cooperstown, NY by (future) General Abner Doubleday (who happened to be a theosophist and someone he had known decades earlier). He died unexpectedly in 1915.