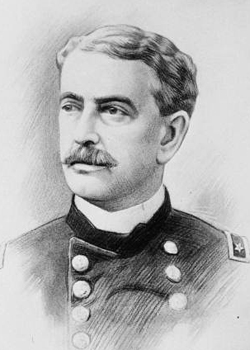 Abner Doubleday is the mythical "inventor" of baseball. He served in the U.S. Army during the Mexican War and the Civil War. He is credited in some circles as one of the fathers of baseball, but that has long since been debunked. It does explain, however, why the Baseball Hall of Fame is in Cooperstown, NY (as in the first game was supposedly there).

One of three sons born in upstate New York of a family outstanding in military and civil life (his father was a congressman and his grandfather a Revolutionary War Veteran), Abner Doubleday graduated from West Point in 1842, 25th in a class of 56, and was assigned to the Artillery-Infantry. Before entering West Point, he had been a civil engineer for two years. He served in the Mexican and Seminole Indian Wars and was at Fort Sumter when it was attacked, signaling the beginning of the Civil War. He aimed the first Union gun that was fired in defense of the fort. He served under General Patterson in the Shenandoah Valley, June-August 1861. He was appointed Brigadier General, United States Volunteers, February 3, 1862 and led the 2nd Brigade, 1st Division, III Corps at Second Bull Run and took command of the Division on August 30 when General Hatch was wounded. He again led the Division at South Mountain, Antietam and Fredericksburg. He was promoted to Major General, USV, November 9, 1862 and commanded 3rd Division, I Corps, at Chancellorsville, and headed that Corps when General John Reynolds was killed in the Battle of Gettysburg, July 1, 1863. He then had administrative duties for the remainder of the war, except when he took command of portions of the Washington, D. C. defenses against Early's raids in 1864.

Doubleday retired from the Army in 1873 and he moved to San Francisco, CA, where he established the first cable car company in that city. He later moved to Mendham, NJ, where he died on January 26, 1893. He was buried in Section 1 of Arlington National Cemetery. He was the author of Reminiscences of Fort Sumter and Moultrie in 1860-61 (1876); and Chancellorsville and Gettysburg (1882). A statue of him and another monument stand on the Battlefield at Gettysburg. His wife, Mary, who died in 1907, is buried with him.

Contrary to a once-widely promoted theory that Abner Doubleday invented baseball (presumably in 1839), there is no evidence that he did other than the testimony of one man decades after the fact. Doubleday, in fact, never claimed that he did. The legend of Doubleday's invention was itself an invention of Al Spalding, a former star pitcher who had become a sporting goods manufacturer. Throughout the second half of the 19th century, debates raged over the origins of baseball. To end the arguments and speculation, Spalding organized a panel in 1907, the Mills Commission. The panel consisted of Spalding, two United States Senators (one a former National League president), two other former National League presidents, and two other former stars turned sporting goods entrepreneurs (George Wright and Alfred Reach). The final report entailed three sections: a summary written by Spalding of the panel's findings, a letter by John M. Ward supporting the panel, and a dissenting opinion by Henry Chadwick. The research methods were, at best, dubious. It was not history Spalding was after, but the perfect story: baseball was invented in a quaint rural town that lacked foreigners and lacked industry by a young man who later went on to graduate from West Point, and be a hero in the Mexican-American War, American Civil War, and in wars against Indians.

Spalding's summary concluded that baseball had been invented by Doubleday in Cooperstown in 1839; that Doubleday had invented the word baseball, designed the diamond, indicated fielder positions, wrote down the rules and the field regulations. However, no written records from 1839 or the 1840s have ever been found to corroborate these claims; nor could Doubleday be questioned, because he had died in 1893. The primary source for the panel's conclusions was the 1907 testimony of Abner Graves, a five-year-old resident of Cooperstown in 1839. Graves, however, never mentioned a diamond, positions or the writing of rules. Graves' reliability as a witness is questionable as he was later convicted of murdering his wife and spent his final days in an asylum for the criminally insane. To further cloud the panel's findings, Doubleday was not in Cooperstown in 1839. He was enrolled in West Point and there are no records of any leave time. A.G. Mills, a lifelong friend of Doubleday's, had never heard Doubleday mention inventing baseball.

Shortly before the Doubleday myth was promulgated, historians began to question it. A major blow to the legend was a book by historian Robert Henderson on the history of bat and ball games, published in 1947, which documented baseball's older origins and links to games played in England earlier. 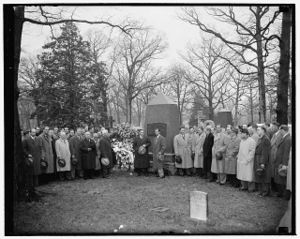 At his death, Doubleday left a considerable supply of letters and papers, none of which describe baseball, or give any suggestion that Doubleday considered himself a prominent person in the evolution of the game. An encyclopedia article about Doubleday published in 1911 makes no mention of the game.

As noted elsewhere in the text, versions of baseball rules have since been found in publications that significantly predate the alleged invention in 1839.

Jeff Idelson of the Baseball Hall of Fame has stated, "Baseball wasn't really born anywhere," meaning that the evolution of the game was long and continuous and has no clear, identifiable single origin."

Some or all content from this article is licensed under the GNU Free Documentation License. It uses material from the Wikipedia article "Origins of baseball".