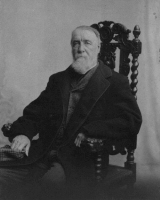 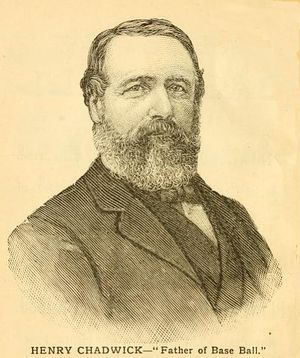 Henry Chadwick is called "the father of baseball". Having seen his first baseball game around 1856, he decided to promote the sport in his role as a journalist. He wrote baseball's first rule book. Credited with inventing the box score, Chadwick modified the cricket box score already in existence and developed it to reflect baseball's particular characteristics. Chadwick introduced statistics such as batting average, which was originally based on runs scored, not hits, divided by at bats. He was the first to tabulate singles, doubles, triples and home runs. Chadwick was elected to the Baseball Hall of Fame on September 13, 1938 by the Centennial Commission.

Born in England in 1824, he did reporting of cricket games in the 1850s and used his knowledge of cricket to inform his understanding of the new game of baseball. However, late in life, he wrote an article asserting that the game of rounders was the game from which baseball had derived. He felt that rounders was a children's game, but that baseball had evolved from it by capturing virtues unique to the American spirit and was thus fit to be the country's "national pastime".

He died after catching cold while attending a baseball game in April of 1908. Albert Spalding, who had disputed his theory of baseball's origin by claiming the game had originated with Abner Doubleday in Cooperstown, NY, received his papers after his death. The years have confirmed Chadwick's views of baseball's origins, but the myth propagated by Spalding has remained vivid, with the Hall of Fame's location in Cooperstown serving as a permanent marker of that legend.

Chadwick's plaque at the Hall of Fame says: "Baseball's preeminent pioneer writer for half a century. Inventor of the box score. Author of the first rule book in 1858. Chairman of Rules Committee in first nation-wide baseball organization."

He wrote the first hardcover baseball book. He edited the first publicly-sold guide, Beadle's Dime Baseball Player, and also edited other guides such as the Reach Guide and the Spalding Guide. The Hall of Fame contains an original copy of the 1860 Beadle's Dime Baseball Player, and the Hall of Fame store sells a reproduction of that book, listing Henry Chadwick as author on the cover and giving rules for baseball, rounders, and townball.

In November 2009, the Society for American Baseball Research established the Henry Chadwick Award "to honor those researchers, historians, analysts, and statisticians whose work has most contributed to our understanding of the game and its history".