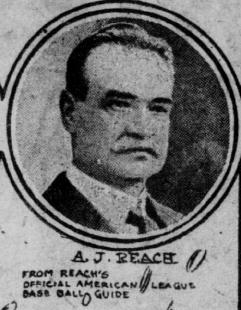 Al Reach was an early ballplayer and later influenced the sport as a businessman.

Reach, born in England, and a cricket player in his youth, was a good enough player by 1865 that he was paid to play for the Philadelphia Athletics.

He was the oldest regular on his team in 1871, the first year of the National Association, but he hit .353, placing in the top ten in the league. His time in the National Association was split primarily between second base and the outfield. He played all five years of the fledgling league's existence, and all with the Athletics. The A's finished first in 1871, and in 1875 finished 2nd. He also umpired a total of 6 games between 1872 and 1875.

His brother Bob, born in New York, played for two different teams. They both lived to see the 1920s. His son, George Reach, introduced the cork center baseball as the official ball of the two major leagues.

Al opened a sporting goods store in 1874, while he was still playing, noticing the growing popularity of the game and the increasing demand for playing equipment. The store eventually moved to a prominent location in Philadelphia, PA, while the venture diversified into the manufacturing of equipment as the A.J. Reach Company. The company published the annual Reach Guide and was for a time the largest sporting goods company in the United States. It eventually merged with Spalding in 1934.

Reach was part owner of the Philadelphia Phillies for the first years of their existence after taking over the slot in the National League vacated by Worcester. He was also the team president. He managed the Phillies briefly in 1890. His tenure as an owner lasted from 1883 to 1903. One of his co-owner was Ben Shibe, who had first become a business partner in his sporting goods venture in 1882, and would later own the rival Philadelphia Athletics.

Reach's name was on the 2013 Hall of Fame ballot in which the Veterans Committee examined candidates from the pre-integration era.

This manager's article is missing a managerial chart. To make this person's article more complete, one should be added.
Retrieved from "https://www.baseball-reference.com/bpv/index.php?title=Al_Reach&oldid=1058058"
Categories: