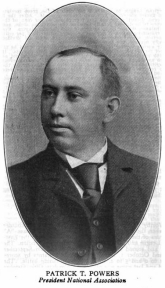 Pat Powers was the manager of the New York Giants in 1892, but played a greater role in baseball history as a minor league executive.

In 1901, the various minor leagues were like innocent bystanders caught in the middle of a struggle between the National League, which pretty much controlled everything in the game in those days, and the fledgling American League, which was trying to muscle in on the territory.

But the presidents of seven of those minor leagues decided they could not stand by and get run over. Patrick T. Powers, president of the Eastern League (a job he held from 1892-1905, and 1907-1911) was a man who knew his way around in the big time of baseball. When the group got together for the original organizing meeting in Chicago, IL on September 5, 1901, they wasted no time in selecting Powers as the first president.

Powers quickly gave the organization a name - the National Association of Professional Baseball Leagues, Inc. It is still the official corporate name to this day, although the organization switched to the less cumbersome and better understood title of "Minor League Baseball" a few years ago.

The presence of Powers in the leadership of the National Association earned instant respect for the new organization and convinced many in major league baseball that it could be worth supporting. Powers and the others knew that a high priority had to be getting the National League to restore the National Agreement, which would give protection to all leagues involved in the areas of contract and territorial rights. The National League had ended this agreement as part of its war with the American League.

The NAPBL set up standards for a player draft, a classification system for the different levels of leagues; a reserve list to limit the number of players for each team; and a salary structure; as well as territorial and contract protection. All remain integral in the structure of the game today.

Powers gave solid leadership to Minor League Baseball, but did not serve a lengthy tenure. He had remained as President of the Eastern League - which would become the International League.

While many observers believe that Powers' beliefs remained strongly behind the NAPBL, he felt an obligation to the members of his league. He felt the conflict of interest required his resignation as head of Minor League Baseball and he terminated his presidency in 1909. Michael Sexton was elected to replace him. In 1961 he was elected to the International League Hall of Fame.