Inducted into Hall of Fame in 1994

"For a five-year period, I would have to take Lou Boudreau (as my shortstop). But year after year, season after season, Rizzuto was a standout." - Paul Richards 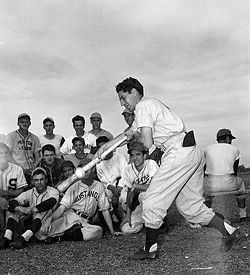 Hall of Famer Phil "Scooter" Rizzuto played thirteen years in the majors, all for the New York Yankees, and then achieved added fame as a Yankee broadcaster. As a player, his most notable season was 1950, when he won the MVP award, although he was also second in the MVP voting in 1949. His nickname, attributed by some to Mel Allen, was actually bestowed on him by his minor league teammate, Billy Hitchcock in the late 1930s because of the way Rizzuto moved around the bases.

Rizzuto appeared in nine World Series, and was named to five All-Star teams. He was three years younger than teammate Joe DiMaggio. Ty Cobb said that Stan Musial and Phil Rizzuto were two of the few then-active players who would fit in well with the old-time style of play from Cobb's era.

He was not a strong choice for the Hall of Fame when he retired as a player, but his years as a broadcaster endeared him to New York fans. Bill James chronicled Rizzuto's growing support for the Hall in The Politics of Glory (later renamed Whatever Happened to the Hall of Fame?).

While Rizzuto's career seems short, he missed three prime years due to World War II. Rizzuto entered the Navy in October 1942 and was discharged in October 1945. He also played in the minors from 1937 to 1940, hitting over .300 at each stop.

Most famous expression as a New York Yankees broadcaster from 1957 to 1996 was "Holy Cow!" He was also fond of calling players "huckleberries."

Rizzuto died 8 years after his long-time New York rival at shortstop and the man who shared his inititals, Pee Wee Reese. For the rest of the 2007 season, the Yankees wore a "10" in black on their right uniform sleeves in tribute.