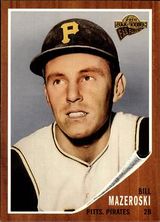 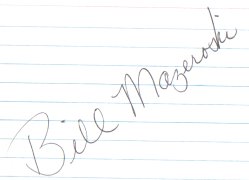 Hall of Famer Bill Mazeroski played seventeen years in the majors, all with the Pittsburgh Pirates. His defense is ample testimony to his HOF induction. He never even came close to hitting .300 in any season and finished his career with a mediocre .260 career batting average and a sub-par OBP of just under 30 percent. But due to his outstanding defense he was named to ten All-Star teams and won eight Gold Gloves. In the 1960 World Series, which the Pirates won, he slugged .640 and hit one of the most famous home runs in baseball history.

In 1954, 17-year-old Bill Mazeroski signed with Pittsburgh as a shortstop and after one season in the minors was moved to second base by Pirates' President, Branch Rickey. Mazeroski was in the minors from 1954 to 1956 with the Williamsport Grays and Hollywood Stars.

He made his major league debut in July 1956 and stayed in the lineup, appearing in 81 games during the remainder of the season. He continued to be the regular second baseman for many years after that.

He won his first Gold Glove in 1958, the second year it was awarded and the first year it was awarded in both leagues. Mazeroski eventually became one of the best defensive second basemen in history with a lifetime .983 fielding percentage. The 10-time All-Star led the National League in assists nine times, fielding percentage three times, and double plays eight times. Working with Gene Alley at short, Bill Mazeroski holds the major league record for double plays by a second baseman (1706).

He had 2,016 career hits, and while his Adjusted OPS+ was always below 100 during regular season play, he did have some power with 138 home runs. His 19 homers in 1958 were a record for a Pirates second baseman until surpassed by Neil Walker in 2014. "Maz" achieved hero status in Pittsburgh's 1960 Fall Classic against the New York Yankees when he became the first player ever to end the World Series with a walk-off home run, hit off Ralph Terry in the bottom of the 9th inning in Game 7.

After his playing career ended, Mazeroski was a coach for the Pirates in 1973 and a member of the Seattle Mariners staff in 1979 and 1980. He continued to work for the Pirates for many years as a spring training instructor, being credited as key to the development of Neil Walker as a second baseman, among others. In June of 2012, Bucs manager Clint Hurdle invited 75-year-old Bill to sit on the team's bench as an additional coach for a series against the Minnesota Twins, with the prior approval of Twins manager Ron Gardenhire.

Mazeroski was elected to the Hall of Fame in 2001 in a controversial decision by the Veterans Committee. A number of observers were outraged that a player who had pedestrian offensive statistics and who had received very little support when his name was on the ballot of the BBWAA could be elected, and the outcry led to a reform of the Committee. In fact, Mazeroski's offensive numbers were quite solid when taken in the context of middle infielders of the second dead-ball era, and it was his superlative defensive numbers that got him elected; he was clearly the outstanding all-around second baseman in the major leagues during the entire decade of the 1960s, and arguably the greatest of all time from a defensive stand-point. In any case, the reform resulted in no player being elected to the Hall by the Veterans Committee for close to a decade, with Joe Gordon being next, in 2009 and outstanding candidates such as Ron Santo having to wait in the wings for years until the new system was made to work as intended.

Mazeroski is the father of college coach and scout Darren Mazeroski. Maz, a Democrat, once ran for Westmoreland County Commissioner but did not get the position.

"He is one of the greatest second baseman I've ever seen. He has all the tools and he has the desire." - George Sisler