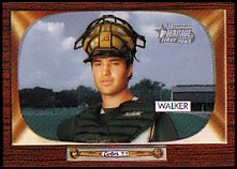 The son of Tom Walker and nephew of Chip Lang, Neil Walker reached the major leagues with the Pittsburgh Pirates in 2009.

In the 2003 junior Pan-Am Cup, Walker was the DH for Team USA and batted .310, slugging .483. His 5 doubles tied Billy Butler for the team lead. He had a superb senior year in high school, hitting .657, slugging 1.358, producing over a run per plate appearance and being named to Baseball America's 2004 All-American High School team as the top catcher in the country. His stock rose in the weeks prior to the 2004 amateur draft and he was selected by the Pittsburgh Pirates in the first round, with the 11th overall pick, with taking the local kid perhaps a key element as well in their decision-making process. He was signed by scout Jon Mercurio for a signing bonus of $1,950,000 after being the third overall position player chosen. 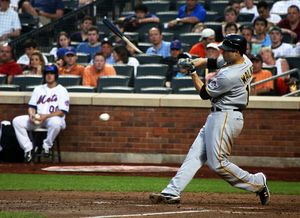 Neil began his professional career with the GCL Pirates and hit a fair .271/.313/.427; he was named the 5th-best prospect in the Gulf Coast League but missed the All-Star team. Late in the year, Walker moved up to the Williamsport Crosscutters and batted .313/.343/.406. Promoted to the Hickory Crawdads in 2005, Neil had a .301/.332/.452 line with 33 doubles and made the South Atlantic League All-Star team at catcher after a mediocre start to the year. He again saw limited time elsewhere, going .262/.244/.357 for the Lynchburg Hillcats in nine games. While he showed good contact and extra-base skills, he only drew 20 walks and committed 22 passed balls in 79 games.

The Pirates decided to try converting Walker to third base due to his defense and the presence of catching prospects Ryan Doumit and Ronny Paulino in the system. He began playing third in the 2005 Arizona Fall League, in which he did okay.

Unfortunately, he injured a ligament in his left wrist on November 9 in the AFL and required surgery, missing the early part of the 2006 campaign and was not at full strength when he returned in late May. He picked it up in late July and August and hit .271/.332/.391 for the Lynchburg Hillcats, then was promoted in mid-August to the Altoona Curve, where he hit just .161 in 10 games while battling illness.

His sister Carrie married infielder Don Kelly in 2007, making the two brothers-in-law as they entered their first training camp together.

He did better in 2009, upping his average to .264. his OBP to .311, and his slugging to .480 as he banged 14 round-trippers in 356 at-bats. He also made an 8-game rehabilitation stay with the GCL Pirates. He made his major league debut with the Pirates on September 1, making an out in a pinch-hitting appearance against the Cincinnati Reds' Justin Lehr after stepping in for Charlie Morton. He got his first start the next day but it was a forgettable one, as he was 0 for 4 with two strikeouts and an error that led to 2 unearned runs in a 5-3 defeat. Overall, he hit .194 in 17 games in the National League his first season.

After starting 2010 in the minors, he was called up in late May and given the team's starting second baseman's job. Things started off much better in his second go-round, as he hit .349 in his first 10 games, and his first major league home run, hit against Ted Lilly of the Chicago Cubs on June 1, was a two-run shot in the 8th inning that gave the Bucs a 3-2 win. He put up a batting line of .296/.349/.462 for a 119 OPS+ with 12 homers and 66 RBI in 110 games. At the end of the season, he was named to the 2010 Topps All-Star Rookie Team at second base. While the Pirates had another dreadful season, particularly on the road, Walker's performance, along with that of fellow rookies 3B Pedro Alvarez and OF Jose Tabata and second-year OF Andrew McCutchen, could finally give Pirate fans hope that a turnaround was on the horizon.

Walker started 2011 on a high note. With Pittsburgh down 2-0 in the 5th on April 1, Neil hit a grand slam off Ryan Dempster of the Chicago Cubs. The blast went all the way out of Wrigley Field. It was his first grand slam in the majors; the only other Pirate to hit one on Opening Day had been Roberto Clemente 49 years earlier. He played 159 games that season hitting .273/.334/.408, with 36 doubles, 12 homers, 83 RBI and 76 runs scored for a 109 OPS+. He tied for 9th in the 2011 NL in doubles, tied for third in sacrifice flies (8), led in putouts at 2B (333), was third in assists at 2B (442) and was second in fielding percentage there (.992, right behind Orlando Hudson). The Pirates did stay above .500 and even flirt with first place until the end of July, but took a disappointing dive after that, finishing well behind in the standings in what was ultimately a frustrating season.

He continued to be a key player for the Bucs in 2012, even though OF McCutchen emerged as the team's biggest star while they once again started strongly, staying above .500 through the end of July. He began the season as the cleanup hitter, but when that did not pan out, he often hit 2nd or 5th instead. On July 31st, he drove in all 5 of his team's run with a homer and sacrifice fly to support A.J. Burnett's 5-0 one-hit shutout of the Chicago Cubs. He finished the season with a batting line of .280/.342/.426, a 112 OPS+, 27 doubles, 14 home runs and 69 RBI.

Walker missed about a month of 2013 after being spiked by Pete Kozma. He remained a steady two-way threat, though his power numbers were low until a late surge with 6 homers in 9 games in September (to help Pittsburgh to its first playoff spot since Walker was 7 years old); he finished with a .251 average, .339 OBP, .418 slugging, 115 OPS+, 16 home runs and 50 walks while fielding .989. He was third in the 2013 NL in times hit by pitch (15, behind Shin-Soo Choo and teammate Starling Marte), second in assists at 2B (397, behind Brandon Phillips), second in double plays at 2B (88, behind Matt Carpenter) and third in fielding percentage (after Darwin Barney and Jedd Gyorko). With the emergence of Marte and superb work from McCutchen and Alvarez, Walker could play a key supporting role; his OPS+ was still nearly identical with home run king Alvarez, thanks to Walker's better walk rate. He was 2 for 5 with a double in the 2013 NL Wild Card Game but collapsed in the next round, going 0 for 19 with 2 walks as he and Marte were a combined 1-for-38 from the top of the order, giving almost no baserunners for McCutchen to drive in. Pittsburgh fell in five games in the NLDS.

Walker was the hero of the Pirates Opening Day win over the Chicago Cubs on March 31, 2014 as he hit a walk-off solo homer against Carlos Villanueva to lead off the 10th inning, giving the Pirates a 1-0 win; it was the first walk-off hit of any kind of his career. It had been 49 years since the Bucs had won an opener on a walk-off hit; Bob Bailey had been the last guy to do it. Walker then made some history April 14 when he and Gaby Sanchez hit back-to-back home runs twice against the Reds. No Pirate duo had done that feat since Toby Atwell and Jerry Lynch in 1954. When he hit his 20th homer of the year against the Chicago Cubs on September 14th, he broke Bill Mazeroski's team record for most homers by a second baseman. He finished the season at .271/.362/.467 (a 126 OPS+) with 23 homers and 76 RBIs in 137 games and was named the recipient of the Silver Slugger Award as the best-hitting second baseman in the National League. He also had a .992 fielding percentage, second in the league at 2B behind Phillips. He then went 0 for 4 as Pittsburgh was blanked by the San Francisco Giants in the Wild Card Game.

On September 23, 2015, Walker had a career-high 6 RBIs in a 13-7 win over the Colorado Rockies. That win clinched a postseason slot for the Bucs for the third straight year, and coincidentally all three clinching games had come on the same date. That year, he played 151 games and hit .269/.328/.427 with 32 doubles, 16 homers and 71 RBIs. His 418 assists were third in the NL at 2B behind DJ LeMahieu and Dee Gordon and he was fifth in fielding percentage. The Bucs once again made a quick exit form the postseason as they lost the Wild Card Game to the Chicago Cubs this time. Walker went 0 for 3 in the game, then on December 9th, he was traded to the New York Mets in return for P Jonathon Niese. Pittsburgh was worried about how much Walker would earn in arbitration and felt they had an acceptable replacement in Jung-ho Kang, while they needed a new pitcher after A.J. Burnett had retired and J.A. Happ had left via free agency. The move was not popular in Pittsburgh due to Walker being a productive hometown kid and the history of salary dumps by the Pirates during their run of losing seasons.

Walker got off to an excellent start for the Mets in 2016 as on April 27th, he tied the team record for homers in April with 9, also tying him for the National League lead at that point. He was one of the team's most consistent hitters during the season, but the season ended early for him when in late August he was diagnosed with a herniated disk in his back, and he opted to undergo surgery. The problem was causing a loss of sensation in his feet, and he had played only four games after August 16th after playing almost every day until then. In 113 games, he hit .282 with 23 homers and 55 RBIs while scoring 57 runs and putting up an OPS+ of 120. The home run total matched his career high set two years earlier. He could have become a free agent after the season but instead accepted a qualifying offer from the Mets to return in 2017. He was hitting 270 in 60 games with 9 homers and 33 RBIs when he was placed on the disabled list on June 15th with a partially torn hamstring. He returned on July 28th, but with the Mets going nowhere, two weeks later, on August 12th, he was traded to the Milwaukee Brewers in return for a player to be named later. He played 38 games for Milwaukee, hitting .267 with 4 homers and 13 RBIs.

On March 12, 2018, he signed a one-year deal with the New York Yankees for $5 million, after having waited all winter for a long-term contract that never materialized. The Yankees had gone into spring training with two raw rookies penciled in to start at 2B and 3B, but with a team otherwise expected to contend for a World Series title, they decided to hedge their bets by bringing on board a couple of veterans who could start if required, first Brandon Drury and now Walker. While his work with the bat was so-so, with a .219 average, 11 homers and 46 RBIs in 113, the Yankees greatly appreciated his ability to play multiple positions, filling in when others were injured or needing a rest, and his willingness to sit down when everyone was available to start. He played 42 games at first base, 32 at second base, 25 at third base, 15 in right field and 1 in left field, in addition to 5 games as the DH. He played by did not bat in New York's win against the Oakland Athletics in the Wild Card Game, and then went 1 for 4 in 3 games in the Division Series against the Boston Red Sox. He started Game 4 at third base and played the entire game.

On January 29, 2019, he signed another one-year contract, this one with the Miami Marlins.

After his playing career ended, he became a color commentator for the Pirates and helped fund a baseball and soccer training center in the Pittsburgh suburbs.

Sources include 2005 and 2006 Baseball Almanacs