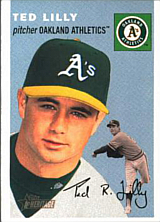 Pitcher Ted Lilly retired after the 2013 season because of chronic neck pain after a 15-year major league career.

In 2015, he was charged with three felony counts of insurance fraud for insuring a recreational vehicle that was already damaged and then trying to claim an inflated repair bill. He was not aware that repair estimates in California are filled in a public database, a fact that made it simple for his insurance company to identify the fraud. Ted accepted a plea bargain with a $2,500 fine, informal probation for two years and 250 hours of community service.