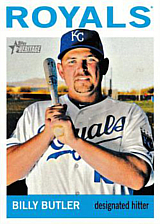 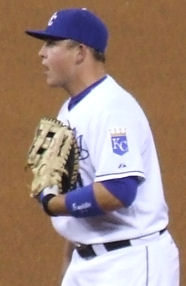 Billy Butler played ten seasons in the majors, earning an All-Star berth and Silver Slugger with the Kansas City Royals in 2012.

In the 2003 junior Pan-Am Cup, Butler hit .414 and slugged .699 for the USA, which won the silver medal. He scored 12 runs, tied for second on the team, and tied Neil Walker for the lead with 5 doubles while finishing third in average. He was selected by the Royals in the first round of the 2004 amateur draft. The 14th overall pick, he was the 4th position player taken, following Matt Bush, Chris Nelson and Neil Walker. As a high school senior, he had hit .426 and slugged .691. After signing with scout Cliff Pastornicky for a $1.4 million bonus, he hit .373/.486/.596 for the Idaho Falls Chukars, scoring 74 runs and driving in 68 in 72 games. He was named the Royals Minor League Player of the Year, even with the late start, as well as the Pioneer League All-Star third baseman. Billy led the Pioneer League in average, was six points behind Cory Dunlap in OBP, led in runs scored, tied Brian McFall for the RBI lead and finished second in doubles with 22. Baseball America ranked him the 4th best prospect in the circuit.

Butler began the 2005 season as the third baseman for the High Desert Mavericks but fielded only .842 and was converted to left field. His bat had no holes, as he walloped pitching to the tune of a .348/.419/.636 line with 25 homers and 91 RBI in 92 games. He was then called up to the Wichita Wranglers, where he hit .313/.353/.527 with another 5 homers and 19 RBI. He was again named the Royals Minor League Player of the Year. Baseball America rated him the 5th-best California League prospect, he made the Cal League All-Star team at DH, was the league's Rookie of the Year and lost the batting title by one point to Miguel Montero. He finished 9 OBP points behind leader Kila Ka'aihue and his slugging percentage was 36 points behind Brandon Wood. Billy batted .331/.388/.499 back with Wichita in 2006 to lead the Texas League in batting average and finished fourth with 96 RBI. He went 2-for 3-with a two-run homer in the 2006 Futures Game and was honored with the Larry Doby Award as the game's brightest star. He finished 10th in the US-based minors in average that year and was rated the top batting prospect in the Texas League according to Baseball America.

During a game on July 29, 2011 against the Cleveland Indians, Billy hit two home runs, and was at the center of both teams' benches clearing when Indians pitcher Carlos Carrasco threw at Butler's head, one pitch after Royals center fielder Melky Cabrera hit a grand slam. That season was his third straight with 40 or more doubles (44) to go along with 19 homers and 95 RBI, and a batting average of .291. Now entrenched as the Royals' full-time DH with Eric Hosmer playing at first, he had another excellent offensive season in 2012, hitting .313 with career bests in homers (29) and RBI (107), making his lone All-Star Game appearance with 2 fruitless at bats for the AL. In 2013, he played in all 162 games for the Royals, hitting .289 with 15 homers and 82 RBI as the team finally showed signs of life after years of being in the cellar. He only played 7 games at first base that season, with the remainder of his playing time coming at DH. On April 7th, he set a Royals team record by driving in 7 runs in a game against the Philadelphia Phillies; the record was broken by Mike Moustakas in 2015.

It was the same pattern in 2014, although he did play 37 games at first base as manager Ned Yost used a bit more flexibility with his starting lineups. He played 151 games and had some of the poorest numbers of his career, with only 8 homers, 66 RBI and a .271 average; his OPS+ was down to 95, his first time below 100 since 2008. The Royals finally got over the hump, returning to the postseason for the first time since the 1985 World Series. The veteran Butler was one of the leaders of the young team as it went on a wild ride that ran all the way to Game 7 of the World Series before falling to the San Francisco Giants. He went 2 for 4 with a pair of RBI in the Wild Card Game and, after being held hitless as the Royals swept the Los Angeles Angels of Anaheim in the ALDS, hit .286 in the ALCS and .333 in the World Series, although he did not connect for a home run all postseason.

On November 18, 2014, after becoming a free agent, Butler signed a three-year deal with the Oakland Athletics for $30 million. Playing for Oakland in 2015, he played 151 games during which he hit .251 with 15 homers and 65 RBI. He was the team's regular DH, but his OPS+ was once gain below average at 98. He improved slightly in 2016, but on August 19th, he made the news for getting into a clubhouse fight with teammate Danny Valencia. While the A's did not want to give too many details, he apparently suffered a concussion which landed him on the disabled list. He came back on August 29th, but played sparingly from that point forward, only going 1-for-11 before the A's announced on September 11th that they were releasing him, eating $10 million in salary due the following season. In 85 games, he hit .276 with only 4 homers and 31 RBI for an OPS+ of 102. The New York Yankees picked him up on September 15th and he finished his career with 12 games in pinstripes, during which he hit .345.