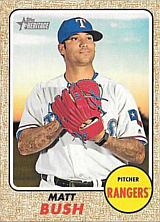 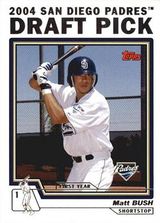 Matt Bush was a surprise selection as the number one pick in the 2004 amateur draft. In a draft with no perceived true top pick, the San Diego Padres opted to select a local kid who was likely to sign early and for a reasonable bonus. He was viewed as the top defensive shortstop prospect in the draft with a rocket arm and questionable skills at the plate. Scouted by Tim McWilliam and scouting director Bill Gayton, Bush signed in June for a club-record $3.15 million and made his pro debut that summer. Almost immediately after signing, Bush was involved in a fracas at a bar and ran into legal problems. "I had a serious off-the-field problem with alcohol," he later confessed. His 2004 and 2005 seasons were disappointments as he failed to produce much offensively. He hit .268/.333/.310 in 21 games for the 2006 Fort Wayne Wizards but was rated as having the best infield arm in the Midwest League by Baseball America. In 2006, a broken ankle sidelined him for half the season, setting him further back.

The Padres announced in 2007 that Bush would be converted to pitching. In his first four games for the AZL Padres, he struck out 11 in 5 1/3 innings and allowed no runs. Overall, in seven games pitched, he posted a 1.25 ERA with 16 strikeouts in 7 2/3 innings of work, then needed to undergo Tommy John surgery. During rehabilitation workouts in February 2009, he assaulted a high school lacrosse player while drunk. The Padres had seen enough and released him. The Toronto Blue Jays signed him a few days after his release and included a zero-tolerance policy regarding alcohol in his contract; he was caught violating it less than two months later and released again. As Bush later explained: "It got to the point where [alcohol] was kind of running my life. I couldn't really do the things on the field that I had done before when I didn't have such bad problems. It really got to me emotionally, physically, everything." He hit bottom that June when he was videotaped in an altercation with police and then charged with driving while drunk, resisting arrest and vandalism. He was sentenced to three years probation and 120 days in a sober living facility. With the help of his family, he found the strength to overcome his addiction.

In 2010, he signed with the Tampa Bay Rays and spent about a month and a half with the Charlotte Stone Crabs, pitching 10 games and avoiding publicity as much as possible. The Rays had seen enough promise, both in his pitching and his personal recovery, to place him on their major league roster after the season. In 2011, he pitched 36 games in relief for the AA Montgomery Biscuits, going 5-3, 4.83 with 5 saves. He struck out 77 in 50 1/3 innings, giving hope for further improvement in the future. And then, his career was derailed once again.

On March 22, 2012, when he was arrested in Fort Myers, FL for leaving the scene of an accident. According to police reports, his Dodge SUV hit a motorcycle driven by a 72-year-old man and knocked the driver to the ground; he then drove over the man's head, which would have killed him instantly had he not been wearing a helmet; to make things even worse, he was driving a vehicle borrowed from teammate Brandon Guyer with a suspended license. He was taken into custody and charged with suspected DUI. At a hearing two days later, Judge Nicholas Thompson set bail at $1.015 million and called Bush "a danger to the community". The family of the victim, who was still in a medically-induced coma a week later, announced that it would sue Bush and Guyer for $5 million each. All the while, Bush remained in custody at the Charlotte County jail, while the Rays had placed him on the restricted list. The victim eventually recovered. After a plea bargain, Matt was incarcerated in the Hamilton Correctional Institute in Jasper, Florida, with a scheduled release date of May 9, 2016. He was released early, in October 2015, after serving 34 months.

On December 18, 2015, Matt signed a minor league deal with the Texas Rangers. He explained that being in prison helped him turn his life around and realize how much he had thrown away. He was taking things one day at a time, attending Alcoholics Anonymous meetings on a regular basis, and working with Rangers player development assistant Roy Silver, who had been key in helping outfielder Josh Hamilton recover from his alcohol addiction. He went to spring training with the Rangers and, on March 23, 2016, made his first professional appearance in four years when he pitched two hitless innings against the Chicago Cubs in a Cactus League game. He showed excellent stuff - a fastball that hit 98 mph and a devastating curveball - but the real issue was whether he would be able to keep his demons under control in order to reach the major leagues and be a productive member of society.

Things happened fast for Matt in 2016. He started the season with the AA Frisco RoughRiders and, in 12 games, went 0-2, 2.65 with 5 saves, giving up only 9 hits against 18 strikeouts in 17 innings. On May 13th, he was called up to the majors and made his debut with the Rangers the same day, pitching a perfect 9th inning in a 5-0 loss to the Toronto Blue Jays, facing Josh Donaldson, Jose Bautista and Edwin Encarnacion. He earned his first win May 15th against the same Blue Jays, in a game in which he plunked Bautista, and the latter retaliated by sliding hard into second baseman Rougned Odor, triggering a large brawl; Bush stayed out of the fray. In 58 games, he went 7-2 with a save and posted a 2.48 ERA. He also only gave up 44 hits and 14 walks in 61 2/3 innings while striking out 61 batters. In the postseason, he pitched a scoreless inning in Game 2 of the ALDS, once again against the Blue Jays, then was called upon in a critical situation in Game 3 on October 9th with the score tied 6-6 in the 8th and the Rangers facing elimination. He completely flummoxed Toronto's batters for two innings, striking out the side in the 8th and retiring the Jays in order with another strikeout in the 9th. But the Rangers could not score and the game went into extra innings. With the score still tied in the 10th, he was sent in for a third inning of work, but the Jays finally got to him, with Josh Donaldson, the first batter he had ever faced in the majors, leading off with a double, then, after an intentional walk to Encarnacion, he struck out Bautista. Russell Martin was up next and he hit a ground ball to short, which forced Bautista, but Martin managed to beat Odor's throw at first which got away from first baseman Mitch Moreland; Donaldson dashed home to end the game and series in spectacular fashion.

Bush started the 2017 season as the set-up man for closer Sam Dyson, but Dyson imploded in his first six outings before heading to the disabled list on April 17th. At first, manager Jeff Banister was not sure whether to use Alex Claudio or Matt as closer; not that it mattered much, as the team was playing poorly and opportunities to record a save were few and far between. Bush got the opportunities as the Rangers got hot in mid-May, nailing down the job by saving four games during a ten-game winning streak that started on May 9th. But he coughed up his 5th blown save on June 30th and the following day, manager Jeff Banister announced that he would be using a closer by committee approach for the time being. He ended up pitching 57 times that season, going 3-4, 3.78 with 10 saves, but none after his demotion. After missing three weeks at the end of August and early September, he managed to bring his ERA back down below 3.00 (it had been over 4.00 at the end of June), but he gave up 6 runs in his final 7 outings to bring it back up. His strikeout rate was actually better than in his rookie season, as he compiled 59 strikeouts in 52 1/3 innings. In 2018 he arrived in spring training with the Rangers wanting to turn him into a starting pitcher, something they had attempted with mixed success with other relievers in previous years, such as C.J. Wilson, Alexi Ogando and Neftali Feliz. Bush simply stated that he was flexible about the role he would be asked to perform, having worked as a starter in the minors before. He was demoted in April to work on his command and came back up towards the end of May, working exclusively out of the pen. He underwent another Tommy John surgery in September, followed by a third operation in July 2019.