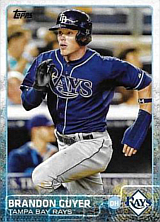 Brandon Guyer is an outfielder who hit a home run in his first major league at-bat with the Tampa Bay Rays on May 6, 2011, a two-run shot off Zack Britton in a 6-2 win.

Guyer was originally a 5th-round choice by the Chicago Cubs in the 2007 amateur draft. He was signed by scout Billy Swoope and made his pro debut that summer. After four seasons in the Cubs' system, he was sent to Tampa Bay as part of the 8-player deal that brought pitcher Matt Garza to Chicago on January 8, 2011. He had a tremendous start with his new organization, hitting .356 in 28 games with the Durham Bulls in his first taste of AAA in 2011. It was not his first lofty batting average: in 2010 with the AA Tennessee Smokies, he batted .344 in 102 games. He was named a Southern League All-Star after the season. In his first taste of the majors in 2011, he played 15 games, going 8 for 41 for a .195 average with 2 homers and 3 RBI.

In spring training of 2012, Guyer lent his Dodge Durango to teammate Matt Bush on March 22nd; he claimed that he was unaware that Bush's license had been suspended because of violations related to alcohol abuse. Bush went on to run over a motorcyclist while intoxicated, putting the man in a coma. The victim's family sued both Bush and Guyer for $5 million dollars over the accident. That season did not get much better: he only played three games for Tampa Bay, the last on May 12th, when he homered off Brian Matusz of the Baltimore Orioles for his only hit of the season. He twent on the disabled list with pain in his shoulder, and on May 25th it was announced that he would undergo season-ending surgery to repair a torn labrum.

Guyer was out of the major leagues for all of 2013 but managed to establish himself as a major leaguer in 2014. That year, he played 97 games for Tampa Bay, hitting .266 with 3 homers and 26 RBI while playing mainly left field. In 2015, he played 128 games, splitting his time between left and right field and hit .265 with 8 homers and 28 RBI. His OBP was helped by an American League-leading 24 hit-by-pitches that year, contributing to an OPS+ of 116. One positive news after that season was that Matt Bush was let out of jail after having been locked up since the spring 2012 incident, and finally had his life under control. In fact Bush made his long-awaited major league debut with the Texas Rangers early in 2016, while Guyer was back with the Rays. At the end of July, in 63 games, he was hitting .243 with 7 homers and 18 RBI, but also had a Ron Hunt-like total of 23 HBP, 10 more than his closest pursuant, in spite of missing about 40% of his team's games and spending most of June on the disabled list with a strained hamstring. On August 1st, he was traded to the Cleveland Indians in return for minor leaguers Nathan Lukes and Jhonleider Salinas. The trade turned out to be a great move for Guyer, as he hit .333 in 38 games the rest of the way, and then played 10 games in the postseason as the Indians made it all the way to Game 7 of the 2016 World Series, which they lost to the Chicago Cubs. He went 6 for 18 in the postseason (.333), with 3 RBI. For the second straight year, he led the AL in being hit by pitch, this time with 31.

Guyer slumped in 2017, hitting just .236 with 2 homers and 20 RBI in 70 games and did not play in the postseason. His batting average continued to fall in 2018, all the way to .206 in 103 games. He did have 7 homers and 37 RBI, and his walks and hit by pitches managed to raise his OBP somewhat, to .300, giving a slightly better OPS+ than the year before - 81 to 73. It was still well below average however. He did play one game in the Indians' loss to the Houston Astros in the Division Series, but went 0 for 2. He became a free agent after the season and in February 2019 he signed a minor league deal with the Chicago White Sox. While he did not make the opening day roster, he was assigned to the minor leagues after being released and given a new contract at the end of March. He played just 16 games for the AAA Charlotte Knights, hitting .244 with no homers and 6 RBIs as he went on the disabled list on April 27th and was not activated again until September, buy which time the team's season was over. After playing winter ball for the Criollos de Caguas in the 2019-20 off-season, he signed a minor league deal with the San Francisco Giants in February, 2020 and had just been assigned to the AAA Sacramento RiverCats when the sports world went on hiatus as a result of the global coronavirus pandemic, then was handed his release on April 2nd just before MLB decreed a freeze on transactions, likely bringing his career to an end.