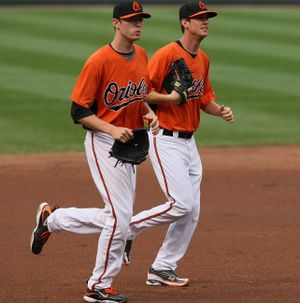 Brian Matusz was the first pitcher taken in the 2008 amateur draft. He made his debut with the Baltimore Orioles a little over a year later..

Matusz was 8-2 with a 0.95 ERA as a high school junior and won All-State honors. In his senior year, he was 7-1 with a 0.55 ERA, allowing 21 hits and 19 walks in 77 innings while fanning 137. Baseball America named him as a third-team high school All-American pitcher. He was picked in the 4th round of the 2005 amateur draft by the Los Angeles Angels of Anaheim but opted for college.

Matusz was 4-3 with a 4.25 ERA as a freshman, yet still earned second-team Freshman All-American honors from Baseball America. His career took off in 2007, when he went 10-3 with a 2.85 ERA. He struck out 163 batters in 123 innings while allowing 98 hits and 37 walks. Matusz was second in NCAA Division I in strikeouts, 31 behind leader David Price but 13 ahead of #3 Wes Roemer. He was third in the West Coast Conference in ERA and led the Conference in strikeouts. He made All-WCC but failed to win Conference Pitcher of the Year honors, which went to Clayton Mortensen (who had a worse ERA and fewer strikeouts). Matusz was named second team All-American by both Baseball America and Collegiate Baseball.

The southpaw joined Team USA for the summer and was 3-1 with a 1.33 ERA, allowing 11 hits and fanning 21 in 20 innings for the team. In the 2007 Pan American Games, he got the start in the semifinals against a Mexican national team featuring former major leaguers Karim Garcia, Gustavo Gil and Benji Gil and noted AAA slugger Luis Alfonso García. He shut them down, allowing 3 hits, one run and 4 walks in 6 1/3 innings while striking out five and got the win over Francisco Campos to send the US to the Gold Medal game (where they lost). He did not accompany the team for the 2007 World Port Tournament due to his heavy workload so far that year.

Matusz was drafted by the Baltimore Orioles with the 4th overall pick in the 2008 Major League Baseball First-Year Player Draft. He was the first pitcher selected. He was signed by scout Mark Ralston for a $3.2 million bonus. Matusz made his professional debut with the Frederick Keys on April 9, 2009, allowing five hits and two runs in 4 2/3 innings against the Salem Red Sox in a no-decision. He went 4-2 with a 2.16 ERA for Frederick, fanning 75 in 66 2/3 IP. Promoted to the Bowie Baysox, he was 7-0 with a 1.55 ERA and .189 opponent average in eight starts in AA.

By early August, he was called up by the parent team when Brad Bergesen was injured. Brian made his major league debut on August 4, 2009, giving up one run in five innings against the Detroit Tigers to pick up the win. A year later, he was named the American League's Rookie of the Month for August, 2010 after going 4-1 with a 2.43 ERA as part of a very solid rookie season for the Orioles.

On May 23, 2015, Matusz was ejected from a game by umpire Paul Emmel for having a foreign substance on his forearm on the mound. He was the second pitcher to be caught in this situation in a few days, following Will Smith of the Milwaukee Brewers. The ejection came in the 12th inning of a scoreless game against the Miami Marlins. He was handed an eight-game suspension for his trespass, same as Smith, and immediately filed an appeal. He ended up playing 58 games for Baltimore, with a record of 1-4 but a solid 2.94 ERA, striking out 56 in 49 innings. He began 2016 on the disabled list, then allowed 8 runs in 6 innings over his first 7 outings to work his way out of the Orioles' plans. On May 23rd, he was traded to the Atlanta Braves along with a competitive balance round pick (#76 overall) in the 2016 amateur draft in return for minor leaguers Brandon Barker and Trevor Belicek.