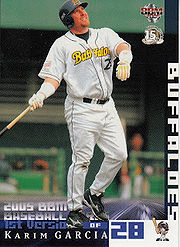 Karim Garcia played ten seasons in major league baseball, was minor league Player of the Year at age 19, played two seasons in Japanese baseball and a year in Korean ball, and appeared on the Mexican team in the World Baseball Classic.

Garcia signed with the Los Angeles Dodgers in 1992 as an amateur free agent. Karim debuted in high class A with the Bakersfield Dodgers, batting .241/~.298/.448. He struck out 109 times in 460 at-bats but cracked 19 homers, most on the club and tied for 8th in the California League in 1993, pretty impressive for a 17-year-old making his professional debut. In 1994 Garcia moved to the Vero Beach Dodgers and hit .265/.319/.511 - he struck out 112 times and drew just 37 walks, but hit 28 doubles, 10 triples and 21 homers. He led the Florida State League in circuit clouts and tied for third in triples. Garcia made the FSL All-Star team in the outfield and league managers voted him as the 9th-best prospect in the loop.

At the tender age of 19, when many players were still amateurs, Garcia reached the heights of professional baseball. He hit .319/~.369/.542 with the AAA Albuquerque Dukes, with similar walk (38) and strike-out (102) totals to what he had done in class A a year earlier; his power stats (26 doubles, 10 triples, 20 homers) were also similar. Garcia led the PCL with 257 total bases and 91 RBI (tied with Harvey Pulliam, was in the top 10 in average and was fourth in homers, five behind Pulliam. He made the All-Star team and managers in the Pacific Coast League ranked only Alex Rodriguez as a hotter prospect. The Sporting News selected Karim Garcia as its Minor League Player of the Year. Garcia was given a cup of coffee by the Dodgers that year.

While a lot was expected of the young Mexican slugger, his career became stagnant - he played just 16 games in the majors in 1996 and 1997, only 3 more than he had as a teenager. He hit 18 homers between AA and AAA in 1996 and was still considered LA's #2 prospect entering 1997, when he batted .305/~.361/.645 with 20 homers - it was his fifth consecutive season with 18-21 homers since turning professional. He had the best slugging percentage in the PCL in 1997 but didn't play enough to qualify for the title, which instead went to Paul Konerko.

Again, as a result of Garcia's struggles in MLB, he was traded to the Detroit Tigers in the 1998 offseason for outfielder Luis Gonzalez, proving that he was still deemed a somewhat valuable property. Garcia showed some promise for his new team, batting .240/.288/.441 with 14 HR's and 32 RBI in 1999. Once again, though, Garcia found himself struggling in 2000 and was traded to the Baltimore Orioles where he spent most of the year at AAA Rochester, and as a result only played in 8 games with the Orioles, registering no hits in 16 tries. At the still relatively young age of 25, Garcia hit .285/.355/.551 with 28 homers and 92 RBI in another fine year in AAA. He was 15 points behind slugging leader Chad Mottola, 3rd in the International League in RBI and 5th in homers (five behind Mottola).

In late December 2000, the Cleveland Indians signed Garcia. In 2001, Garcia spent most of the year at AAA Buffalo, only spending 20 games with the Indians, but batted .311/.360/.711 with 5 HR's and 9 RBI in limited time. In his sixth season at AAA, Karim batted .264/.326/.517 with 106 Ks and 31 home runs. Still just 26, he had accumulated 196 homers as a pro. He made the IL All-Star team and was second in the loop in long balls, five behind Izzy Alcantara. Once again, Garcia was let go by the team, this time despite showing some good batwork in the majors. Many 26-year-olds who had hit like that would have been given more of a chance. But as people perceived Garcia as having had several chances already, he was considered a bust not worthy of an extended look. He had not even had 1,200 at-bats in the majors and was coming off a 172 OPS+ season.

Though, Garcia again struggled (in under 100 AB, a poor sample size) and was let go by the Indians, returning to the Yankees, where he blossomed again when given a chance, finishing with a .262/.302/.422 with 11 HR's and 35 RBI. Garcia found himself on the 2003 Yankees' ALCS and World Series rosters.

Following the 2003 season, Garcia was let go as a free agent and signed with the New York Mets in January 2004. Garcia spent part of the season with the Mets before being traded to the Baltimore Orioles once again for reliever Mike DeJean. Garcia struggled again with the Orioles and was released soon afterward. Garcia finished with a career major league line of .241/.279/.424 with 66 HR's and 212 RBI. He had hit 238 homers in Organized Baseball.

Garcia played with the Mexican team in the first World Baseball Classic, batting .429 (3-7) with no HR's and one RBI.

Karim struggled in his second season with Orix. He only hit .249/.302/.412 for the club in 2006; he still clubbed 13 homers in 301 AB but the performance was underwhelming for a right fielder. He also was fined for answering a cell phone during pre-game practices when the team was trying to crack down on discipline.

Garcia was signed by the Philadelphia Phillies in January of 2007, inking a minor-league deal with a spring training invitation. Garcia was released because of his poor defense and promise shown by Greg Dobbs. In an article from mlb.com, it was stated that Garcia was hitting .305 in spring training, but Dobbs had hit .389 with four homers and some defensive ability, and that made Garcia expendable. Garcia returned to the Mexican League in 2007 and is playing for the Sultanes de Monterrey. He batted .374/.437/.680, had 20 home runs and 63 RBI in 76 regular season games. He finished 5th in average and second to Donny Leon in slugging. He dazzled in the playoffs and scored both runs in Monterrey's 2-1 win in the finals over the Yucatan Lions. Garcia singled in the first and scored on a Mendy Lopez hit and later tacked on a homer. His five playoff homers tied teammates Lopez and Luis A. Garcia for the most.

Garcia only went 2 for 18 with a walk and a double as the left fielder and #3 hitter for the Mexican team in the 2007 Pan-American Games. They still won the Bronze Medal, thanks in part to excellent pitching from Jorge Campillo and Francisco Campos.

In the 2008 Final Olympic Qualification Tournament, Garcia was Mexico's starting center fielder. He hit .227/.292/.545 with two home runs and six RBI in six games. He tied for second in the event in homers, even with Matt Rogelstad, Seung-yeop Lee, Kuo-Hui Lo and Carlos Valencia, one behind Nick Weglarz. He drove in four of their five runs in a win against the South African national team. Mexico finished 4th in the event and only the top three teams advanced to Beijing for the Summer Games.

Garcia signed with the Lotte Giants in 2008 (managed by Jerry Royster) and quickly earned the nickname "The Latino Bambino", slugging .857 in his first four games in the Korea Baseball Organization. He finished with a batting line of .283/.353/.541 with 30 homers and 111 RBI. He got the most votes for KBO MVP of anyone not named Kim, getting 5 of 94 votes and finishing behind Kwang-hyun Kim, Hyun-soo Kim and Tae-kyun Kim. He led the KBO in RBI, 7 ahead of Dong-joo Kim and was one homer behind leader Tae-kyun Kim.

Garcia was Mexico's right fielder in the 2009 World Baseball Classic. He hit .421/.450/.885 with 3 homers, 5 runs and 5 RBI in five games. He led Mexico's starters in average and slugging and was second to Scott Hairston in OBP. He tied for second on the team in runs (1 behind Adrián González) and tied for third in RBI. He led the team in home runs. Karim went 4 for 4 with 4 runs and 4 RBI in a 16-1 game in which Mexico eliminated the Australian national team; the homers were off Tristan Crawford and Adam Bright. He singled and homered (off Yunieski Maya) in Mexico's 7-4 loss to Cuba, their last game.