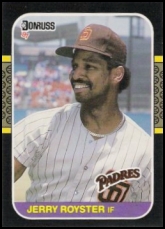 Jerry Royster played 16 years in the major leagues, of which 10 were with the Atlanta Braves. He had over 300 at-bats in 5 of those seasons, and for much of the rest of his career was a useful infielder-outfielder. Similarity scores shows that the most similar player to Royster is another all-purpose player, Derrel Thomas.

Royster hit his only career grand slam on June 21, 1985 as a member of the San Diego Padres against the San Francisco Giants. It came in the 8th inning off Greg Minton.

Jerry was featured on the opening credits of the tv show This Week in Baseball for many years making a leaping catch at Fulton County Stadium as a member of the Atlanta Braves.

In 1989, Royster played for the Bradenton Explorers of the Senior Professional Baseball Association. He hit .337 in 20 games with the club.

Royster was a manager in the minors from 1989-1992. He was a member of the expansion Colorado Rockies coaching staff in their inaugural season of 1993. He returned to the minor leagues as a coach for the Jacksonville Suns in 1994, then managed from 1995 to 1998. In 1999 he was the minor league baserunning/infield coordinator for the Montreal Expos. After spending over two seasons a Milwaukee Brewers coach, he was the club's skipper for most of the 2002 season. Royster was the Los Angeles Dodgers infield coordinator in 2003-2004. In 2005 and 2006, he managed the Las Vegas 51s of the Pacific Coast League.

Royster was hired to manage the Lotte Giants for 2008. He was the first foreign manager in the 26-year history of the Korea Baseball Organization. Lotte got off to a good start in the first month while Royster was trying to learn how to greet properly. He was bowing as common in Korea but was also making eye contact, an American custom frowned upon in Korea. Royster led Lotte to the playoffs for the first time in 8 years, but they were swept by the Samsung Lions. One of his players was Karim Garcia.

In 2012, he was named third base coach of the Boston Red Sox under new manager Bobby Valentine.

One of his cousins is Greg Vaughn. Therefore, he is also related to Mo Vaughn and Cory Vaughn. He is also the uncle of Aaron Fuller.