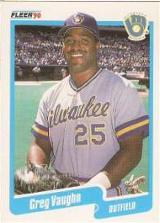 Vaughn was a popular player at draft time, being picked four times before he was picked in the secondary phase of the 1986 amateur draft by the Milwaukee Brewers, out of the University of Miami. He was a prodigious home run hitter in the minors, slugging at least .540 at each stop as he moved from the Helena Brewers of the Pioneer League to the Beloit Brewers in the Midwest League to the El Paso Diablos in the Texas League to the Denver Zephyrs in the American Association, spending one year in each spot.

In 1998 he did it again, when he hit 50 home runs with the San Diego Padres, third behind Mark McGwire's 70 and Sammy Sosa's 66, as the Padres won the pennant. He was named Comeback Player of the Year. In 1999, he again slugged over .500 with a different team, the Cincinnati Reds, as he hit 45 home runs.

Closing out his career in 22 games with the Colorado Rockies in 2003, he got only 7 hits for a .189 average, but 6 of them were for extra bases, allowing him to go out with a slugging percentage of .514 in that last partial season before he was granted free agency in July.

He ranks # 46 on the all time list for at-bats per home run, just ahead of Steve Balboni and Bob Horner at # 47 and # 48. The best of the low-average sluggers, Harmon Killebrew, is # 7 on the list.

He holds the major league record for home runs by players whose names start with "V", beating out his cousin Mo Vaughn and Robin Ventura.

Vaughn's son Cory Vaughn, who played at Jesuit High School, earned a scholarship to San Diego State University to play for Vaughn's former teammate Tony Gwynn. Cory was drafted by the Philadelphia Phillies in the 43rd round of the 2007 amateur draft and then was a fourth-round pick in 2010.

Vaughn is also a cousin of Jerry Royster.