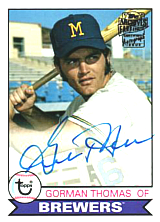 Gorman Thomas had one of the longest careers of the low-average sluggers from the 1980s. Thomas was the same general type of player as Rob Deer, Pete Incaviglia and others (lots of strikeouts and homers), but managed to survive 13 seasons and hit 268 home runs, despite batting only .225 lifetime. During the 1979 and 1980 seasons combined, he struck out an amazing 345 times.

Thomas drew copious walks, and his .324 on-base percentage (to some extent) made up for his low batting average, as his OBP was slightly above average for the era in which he played. Winning a home-run championship gave him a star status that helped him remain in the big leagues after his prime was over.

He was an All-Star only once, in 1981. With the Milwaukee Brewers in 1982, he was a prominent member of Harvey's Wallbangers. The team went to the 1982 World Series, while Thomas led the American League in home runs.

He was originally a shortstop who was drafted out of high school in the first round of the 1969 amateur draft, when the Brewers franchise was still the Seattle Pilots. In 1974 with the AAA Sacramento Solons, he hit 51 home runs, though to be fair his home ballpark, Hughes Stadium, was a football field that had a left field fence 232 feet away. He hit another 2 home runs in the major leagues that season for a total of 53. It took him a while to become a major league regular. While he did play in the majors every year from 1973 to 1976, he hit below .200 in three of those seasons while racking up the strikeouts, and the only time he was above the .200 mark, it was in only 46 at-bats, his lowest total of the four-year stretch. He showed great power so the Brewers did not want to give up on him, a decision that proved to be wise.

After spending all of 1975 and 1976 in the majors, but getting only limited playing time because of his inability to keep above the Mendoza Line, he was sent to the AAA Spokane Indians in 1977 and had a great season, hitting .322 with 36 homers and 114 RBI. The Brewers were loaded with prospects by then and had no room on their 40-man roster for him. Fearful of losing Gorman in the 1977 Rule V draft, they worked out a sweetheart deal with the Texas Rangers: on October 25th, Thomas was sent to Texas, which had roster space, as the player to be named later in a deal in which the Brewers had purchased C/OF Ed Kirkpatrick from the Rangers back in August. Thomas never even made it to spring training with Texas; on February 8, 1978, the Rangers sold him back to Milwaukee. He became a starter in the Brewers' outfield that season and had his first productive year, playing 137 games in which he hit .246 with 32 homers and 86 RBI.

Thomas's 45 homers in 1979, tops in the American League, were the Milwaukee Brewers record for 28 years until surpassed by Prince Fielder (Richie Sexson had twice tied Thomas's record). He had other big home run seasons, with 38 in 1980 and 39 in 1982, which tied for the AL lead with Reggie Jackson. Similarly, his 21 home runs in 1981 may not look too impressive at first glance, but they were only one fewer than the AL-leading total of 22, shared by four players, in that strike-shortened season. 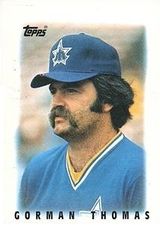 In a controversial deal that marked the end of the Brewers as a dominant power in the AL East, Thomas was traded to the Cleveland Indians on June 5, 1983, with Ps Ernie Camacho and Jamie Easterly, in return for OF Rick Manning and P Rick Waits. Manning was everything Thomas wasn't: a slick defensive center fielder with superficially impressive batting averages but no power, whereas Thomas was all about massive power, low batting averages, and only passable defense, which was in steep decline as he was aging. Thomas had a rough start to his season, and was hitting below .200 with only 5 homers; he had played poorly in the 1982 Postseason as well, going a combined 4 for 41 with one long ball as the Brewers came within one game of being World Champions, so there was concern that Thomas was done as a player. He turned things around somewhat with the Indians, connecting for 17 homers with a .221 average in 106 games the rest of the way, while Manning and Waits brought little to the table for the Brewers.

After the 1983 season, Thomas was traded again, this time to the Seattle Mariners, with 2B Jack Perconte, in return for 2B Tony Bernazard. He had a lost season with the M's in 1984, hurting his shoulder and hitting only .157 in 35 games. He managed a great comeback in 1985, now as a full-time designated hitter, as he was named the AL Comeback Player of the Year: he hit 32 homers and drove in 87 runs, scoring 76, even though he hit only .217. In 1986, he started the year slowly, hitting .194 in 57 games, but still hit 10 homers and drove in 26 runs in that span. When the Mariners handed him his release in late June, the Brewers, who were by now floundering in the bottom of the standings, picked him up in hopes of recapturing his lost glory. It did not work, as he hit just .179 with 6 homers the rest of the way. He was released after the season, and his career was over. In 13 seasons, he hit .225, but with 212 doubles and 268 home runs; he also drew 697 walks even if he struck out a lot, but the walks and the power were enough to give him a very solid career OPS+ of 114. In effect, he was a prototypical late 1990s "take-and-rake" slugger before the style became all the rage.

Gorman was inducted into the Miller Park/Milwaukee Brewers Walk Of Fame in 2004, along with long-time second baseman and contemporary Jim Gantner.