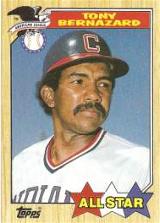 The Montreal Expos signed Tony Bernazard on November 13, 1973, and he played his first pro ball as a 17-year-old rookie for the Kinston Expos in the Class A Carolina League in 1974. He had learned the game from All-Star first baseman Vic Power in his native Puerto Rico. Tony spent six years in the minors, with his 1978 season with the Denver Bears being his best. In 479 at-bats he laced 137 hits, including 9 home runs, for an even .300 average as well as an American Association-leading 107 runs scored.

Tony got his first taste of the big leagues with the Expos in 1979, filling in for an injured Chris Speier for a month in midseason. Over the next 10 seasons, he would see the inside of six different clubhouses. After spending all of 1980 as a backup infielder in Montreal, he would move along to the Chicago White Sox, then the Seattle Mariners. 1984 through 1987 found him with the Cleveland Indians. During his Indian tenure, Bernazard logged an 0-for-44 streak at the plate in 1984, finishing at .221. The hitless drought was once believed to be a MLB record, though later research indicated that Bill Bergen had a longer hitless run. Tony peaked in 1986, when he batted .301 with 169 hits and 73 RBI, setting a club record for homers by a switch hitter (17). On July 1, 1986, he became the first Indian to homer from both sides of the plate in one game. Eventually, his bat could no longer compensate for his inadequacy as a fielder and he was traded to the Oakland Athletics in July 1987. In 1988, Bernazard signed with Japan's Nankai Hawks. He hit .315/.386/.509 his first year there (including a 28-game hitting streak), then slammed 34 homers and drove in 93 in 1989. In 1990, he slumped to .275/.375/.482 with 13 homers. The Detroit Tigers signed him for the 1991 season, but Tony was only able to hang around for a month before earning his release on May 7.

In 2004, Bernazard was a special assistant for the MLBPA. That December, he became the "Vice President, Player Development" for the New York Mets. His Mets front office tenure was marred by several incidents, chief among them his removing his shirt and challenging the Binghamton Mets to fight him in the summer of 2009. With other incidents involving him having a scout ejected from a seat at Citi Field due to it being Tony's preferred seat and a screaming match with Mets closer Francisco Rodriguez on a team bus in short order, Tony was relieved of his duties on July 29; not before a bizarre Mets press conference where GM Omar Minaya accused the beat reporter of breaking the stories, New York Daily News scribe Adam Rubin, of angling for a job in the Mets organization and printing the stories out of jealousy.

Despite being pictured as an All-Star in the 1987 Topps trading card set, Bernazard was never named to a big league All-Star team.