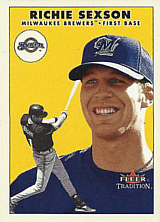 At Prairie High School in Brush Prairie, Washington, Richie Sexson was an All-State performer in baseball, basketball, and football. He also set the school record for the most RBI and home runs in a career.

At the age of 18, Richie was drafted by the Cleveland Indians in the 24th round of the baseball 1993 amateur draft. He did not play his first game of Major League Baseball baseball until 1997, when he appeared briefly in 5 games for the Indians, collecting 11 at-bats, with 3 hits, 1 run and struck out 2 times. He appeared in 49 games the following year, 1998, collecting 174 at-bats, 54 hits, 28 runs, and scored 14 doubles and 1 triple while being struck out 42 times and walked 6 times.

In 2001, Richie played in 158 games for the Brewers, hitting 45 home runs, which tied Gorman Thomas's Milwaukee Brewers record for a single season, although he also set the single-season record that year for strikeouts by a Brewer with 178. The strikeout record was surpassed by José Hernández in 2002 who neared the Major League record with 188 strikeouts. Sexson and Thomas would share the home run record until 2007, when Prince Fielder topped their 45.

With the Diamondbacks and Mariners[edit]

Richie was traded to the Arizona Diamondbacks in December of 2003 along with pitcher Shane Nance and a player to be named later (Noochie Varner) for infielders Junior Spivey, Craig Counsell and Lyle Overbay, catcher Chad Moeller, and pitchers Chris Capuano and Jorge de la Rosa. This trade proved disastrous for the Diamondbacks but beneficial to the rebuilding Brewers, as Sexson missed most of the 2004 season after twice suffering a reverse subluxation of his left shoulder while attempting to check his swing. 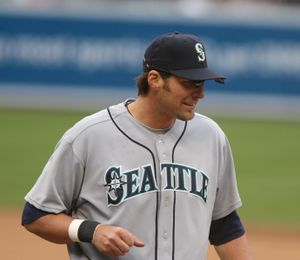 Prior to the 2005 season, Sexson signed a four-year contract with the Seattle Mariners worth $50 million. Soon after signing the contract, he was charged with a DUI, for which he was only convicted of one count of negligent driving, to which he pled guilty, and was let off with a small fine. Sexson put together a very nice season in 2005, hitting 39 home runs and collecting 121 RBI. He was nominated for the Viagra Comeback Player of the Year Award, but lost to Jason Giambi of the New York Yankees. He continued hitting well in 2006, blasting 40 doubles and 34 home runs, while driving in 107 runs.

Sexson's production fell off a cliff in 2007 for the Mariners. Although he played regularly, being used in 121 games, he only managed a .205 batting average with a disappointing 21 home runs, for an OPS+ of 84. He continued to struggle during the first half of the 2008 season, with a .218 batting average and 11 home runs in 74 games (an OPS+ of 90). With the Mariners tumbling to the bottom of the AL West standings, Sexson was released at the All-Star break, with Seattle swallowing a large amount of unpaid salary, but he was picked up by the New York Yankees. His stay in the Bronx was short-lived; after 22 games, in which he went to bat only 25 times, he was released on August 15, ending his professional career. He had hit .250 with 1 home run and 6 RBI in pinstripes.

In his first year of eligibility for the Hall of Fame in 2014, he failed to receive a single vote and dropped off the ballot.