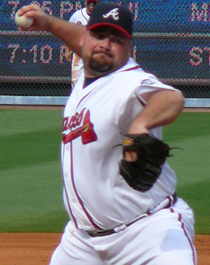 Pitcher Bob Wickman was signed by scouts Phil Rizzo and Lou Snipp for the Chicago White Sox as a 2nd round pick in the 1990 amateur draft.

Surprisingly, he was the all-time saves leader for the Cleveland Indians from 2006 when he passed Doug Jones when he recorded his 130th save for the team. He had 139 saves during his six years with the team, and the record held until he was passed by Cody Allen in 2018. He set a career best and led the American League with 45 saves in 2005.