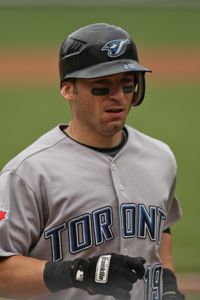 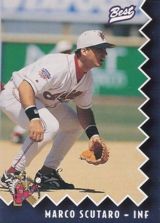 On September 22, 2006, the Oakland Athletics and Los Angeles Angels were locked in a pennant race. The game that day ran to the 12th inning, and when the Athletics got a man on third base with one out in the bottom of the inning, the Angels brought in Chone Figgins from the outfield to play as a fifth infielder, to try to prevent Marco Scútaro from driving the man home. The count ran to 0-2, but Marco hit the ball into the outfield, scoring the run. It was his eighth time through 2006 that he had a successful game-ending at-bat.

He was traded to the Toronto Blue Jays for two minor leagues after the 2007 season. He started 2008 as a utility player, but hit well enough that manager Cito Gaston would not take him out of the starting line-up after he took over for John Gibbons. Scutaro ended up playing in a career-high 145 games, hitting .267 with 77 runs scored while splitting time almost equally among second base, third base and shortstop. Not venturing far from where he would play in the regular season, he played on the "home turf" at Rogers Centre as a member of the Venezuelan team in the 2009 World Baseball Classic. He then went on to have his best season for the Blue Jays in 2009. Starting at shortstop and acting as the team's lead-off hitter, he collected 162 hits and drew 90 walks to score a career-high 100 runs. He was not just a slap hitter, slugging 35 doubles and 12 homes during the season. He became a free agent at the end of the year and signed with the Boston Red Sox for 2010, taking over for Alex Gonzalez, who moved to Toronto in return.

After two seasons with the Red Sox, Scutaro moved to the Colorado Rockies in 2012. After only half a season there, he was traded to the San Francisco Giants for Charlie Culberson on July 27th. On August 8th, he had a career-high 7 RBI in leading the Giants to a 15-0 win over the St. Louis Cardinals, topped with his third career grand slam, off Mitchell Boggs in the 9th inning. He had hit .271 in 91 games for the Rockies, then improved to .362 in 61 games for the Giants, given them a welcome offensive boost. He finished the year with a combined 190 hits, 87 runs scored and 74 RBI. He was involved in two key plays in Game 2 of the NLCS against the Cardinals on October 15th. Playing second base, he was leveled by a sliding Matt Holliday who was trying to break up a potential double play in the 1st inning. Scutaro managed to make an accurate throw to first base in spite of the slide, albeit late. He took a few minutes to collect himself, but stayed in the game, and in the 4th had the key hit of the contest, a two-out single off Chris Carpenter with the bases loaded in the 4th that increased the Giants' lead to 4-1. He left in the next inning, replaced by Ryan Theriot, and underwent an MRI on his hip that showed no fracture. The Giants went on to win, 7-1, to even the series, while after the game his manager Bruce Bochy denounced what he called an "illegal slide" by the much bigger Holliday. Not only did he recover, but he was well nigh unstoppable with the bat for the remainder of the series, going 14 for 28 (.500) with 3 doubles, 6 runs and 4 RBI. He was named the NLCS MVP for his performance as the Giants reached the 2012 World Series. He was at it again in the World Series, particularly in Game 4, when he led off the 6th with a single against the Detroit Tigers and scored the Giants' second run on Buster Posey's homer off Max Scherzer. With two outs and the score tied at 3-3 in the 10th, he singled off Phil Coke to drive in Ryan Theriot from second base for the game-winning run that completed a four-game sweep.

The Giants were obviously pleased with Marco's production, as on December 4th, they re-signed to a three-year contract for $20 million. He was an All-Star for the first time in 2013, when he finished the season with a .297 average in 127 games. In spite of hitting just 23 doubles and only 3 triples and 2 homers, and drawing 45 walks, his OPS+ was 110, a reflection of the very tough hitting context that was AT&T Park that year. He missed almost the entire first half of the 2014 season because of a lower back strain, only making his debut for one game on July 12th, during which he went 0 for 3, before getting his first hit on July 20th. The Giants were easing him back into the line-up, fearful that his back would not hold up if he were to play everyday, and even signed Dan Uggla to a minor league contract as an insurance policy, in spite of Uggla's terrible struggles at the plate over the previous 12 months. In fact he only played 5 games for the Giants, hitting .091, before going back to the DL on July 25th, staying there for the remainder of the year. Rookie Joe Panik eventually claimed the second base job and did very well, while the Giants went on to win their third World Series title in five years, but without Marco. He underwent spinal fusion surgery on December 22nd, a procedure that could well preclude any further comeback, although he was planning to attempt rehabilitation within six months, provided the procedure was successful enough. He was designated for assignment by the Giants in January of 2015 in order to clear room on the major league roster for free agent Nori Aoki, but the team indicated they would keep him in the organization while he continued recuperating from the surgery. They were on the hook for another $6 million remaining on the three-year contract he had signed after the 2012 season.

Scutaro is married with two children. He enjoyed playing baseball and soccer growing up.