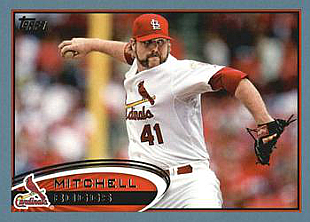 Mitchell Boggs tried his hand at quarterback for the University of Tennessee at Chattanooga, before he transferred to the University of Georgia and stuck with baseball. He was drafted by the St. Louis Cardinals in the 5th round of the 2005 amateur draft, signed by scout Roger Smith and made his pro debut that summer.

Boggs was a vital Cardinal reliever following his debut in 2008, winning a World Series ring in 2011 and breaking out in 2012 with a 4-1, 2.21 season in 78 games (73 1/3 innings). In 2013, following an appearance with Team USA in the 2013 World Baseball Classic (1 1/3 IP, 1 H, 1 BB, 0 R), the Cards inserted him as closer. He imploded, racking up an 11.05 ERA in 14 2/3 innings. After trips back to Triple A did not set him right, he was dealt to the Colorado Rockies in July, making his final nine big league appearances largely as a September call-up. Attempts to return with the San Francisco Giants, Boston Red Sox and Atlanta Braves over the next two seasons proved unsuccessful.