Note: This page is for 1980s catcher and long-time manager John Gibbons; for the John Gibbons who played in the Negro Leagues in 1941, click here. 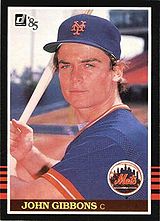 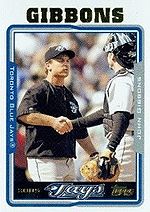 Catcher John Gibbons was selected by the New York Mets in the first round of the 1980 amateur draft. After putting up unspectacular numbers in the minors in his first few years, he had a breakout season with the Jackson Mets in 1983, hitting .298 with 18 homers and 67 RBIs, being named the club's co-MVP, and being selected to the Texas League All-Star team. After beginning the next year on the disabled list with a fractured cheekbone, he made his major league debut with the Mets on April 11, 1984. However, he struggled at the plate in the majors, getting just 2 hits in 31 at bats. After another stint on the DL, he spent the remainder of the season with the AAA Tidewater Tides.

He returned to Tidewater in 1985, hitting .259 with 9 home runs and earning a spot on the International League All-Star team. He spent the majority of the next season, 1986 with the Tides again before getting a second cup of coffee in the majors while starting catcher Gary Carter was injured. He hit much better in his second stint with the Mets, hitting .474 in 8 games. However, with Carter back the following season, Gibbons found himself back at Tidewater in 1987 for a fourth straight season. After eight seasons in the Mets system, he was traded to the Los Angeles Dodgers for Craig Shipley prior to the 1988 season. He never returned to the majors as a player. After one season in the Dodgers system, he spent a year in the Texas Rangers organization and another with the Philadelphia Phillies before ending his playing career.

With his playing days behind him, Gibbons returned to the Mets as a roving minor league catching instructor from 1991 to 1993 and coach of the Capital City Bombers in 1994. He got his first managerial experience as skipper of the Kingsport Mets in 1995 and led the club to the Appalachian League championship. He moved on to the St. Lucie Mets the next year and won another league title. After several more years managing in the Mets organization, he became a Toronto Blue Jays coach in 2002. He managed the Jays for three games in 2003 in skipper Carlos Tosca's temporary absence, winning them all. Gibbons took over as manager on a full-time basis when Tosca was fired during the 2004 season. That year, the Jays finished in last place in the AL East. The following year, 2005, he led the team to a third-place finish, and in 2006, the club improved to second place, their best finish since 1993. However, Gibbons also gained negative attention that year for his very public feuds with Shea Hillenbrand and Ted Lilly. Hillenbrand was eventually traded to the San Francisco Giants, and Lilly left the team as a free agent. Two years later, Gibbons got into another highly publicized dispute, this time with slugger Frank Thomas; Thomas was released.

Gibbons was fired along with three of his coaches on June 20, 2008, with the Blue Jays in last place in the AL East, and replaced by former Blue Jay manager Cito Gaston. He was the third Major League manager fired in less than a week.

From 2009 to 2011, Gibbons was the bench coach of the Kansas City Royals. He returned to the dugout in 2012, hired by the San Diego Padres to be the manager of the AA San Antonio Missions. On November 20th that year, he was surprisingly hired to be the Blue Jays' manager for a second stint, his return coming after Jays GM Alex Anthopoulos­ had gone on a shopping spree, stocking the team for a run to the postseason in 2013. That scenario did not pan out, however, as the Jays were racked by injuries and sub-par performances to finish in last place in the AL East. They had got off to a dreadful start, managed to right the ship in mid-May and early June when they returned to .500 and got close to the division leaders, only to see the bottom fall out starting in July. In 2014, the Jays started off strong and were leading the AL East until mid-season, but a key injury to slugger Edwin Encarnacion ushered in a skid, and they eventually finished in third place, well back of the division-winning Baltimore Orioles.

On June 22, 2015, Gibbons won his 500th game as Blue Jays manager. The Jays were locked in a tight four-team race for the division crown at the time, with only the Boston Red Sox having been distanced. Things stayed tight until late July, when the Jays made a number of bold moves at the trading deadline and began a tremendous surge that allowed them to catch and pass the New York Yankees to earn their first division title since 1993. They came back from losing the first two games of the Division Series at home against the Texas Rangers and finally were eliminated by the Kansas City Royals in the ALCS. However, in spite of the tremendously successful season, there was turmoil in the Blue Jays front office that fall, as Gibbons' biggest champion, GM Anthopoulos left after a power struggle with new team president Mark Shapiro. Shapiro brought in a number of associates from his previous job with the Cleveland Indians, including former manager Eric Wedge as a consultant - and as a potential manager in waiting. Still, Gibbons entered 2016 in a pretty solid position, having been able to turn a collection a collection of talented players with some holes - most importantly in the bullpen - into a winning squad.

With the Blue Jays sputtering around .500 in mid-May of 2016, he vented his frustration in a strange series of events. Things boiled over on May 15th when he was ejected from a game with the Texas Rangers. He then returned to the field later in the game when a brawl broke out between slugger Jose Bautista and Rangers 2B Rougned Odor, resulting in a slew of other ejections (a total of eight between the two teams, including Gibbons's earlier one), and a three-game suspension for him. He was also ejected from the next day's game, sat out the three games, and on May 22nd was ejected again, this time for arguing that Minnesota twins pitcher Philip Hughes had thrown at 3B Josh Donaldson. However, just as they had done the previous season, the Blue Jays got stronger as the season advanced. They made their push in August again, although they had not been as spectacular as the year before in making moves at the trading deadline. Still, starting the month a half-game back of the Orioles, they ended it with a two-game lead over the Red Sox and four ahead of Baltimore. The team struggled a bit in September and was passed by the Red Sox for first place in the division, but a strong final week clinched the first wild card spot, allowing them to host the Orioles for the Wild Card Game, which they won in extra innings. They then continued by sweeping the Rangers in the Division Series, but lost to the Cleveland Indians in the 2016 ALCS, finishing just shy of the World Series for the second straight year.

With his position now consolidated, he signed an extension through the end of 2019 just as spring training was winding down in 2017. However, that season turned out to be a disappointment, as the Jays started poorly, just about righted the ship in May, but never got closer to one game below .500 (which they reached on numerous occasions but were never able to improve upon). Eventually, they began to fade away and finished in fourth place in the AL East just ahead of the 2017. In 2018, following the departure of Bautista - Edwin Encarnacion had left a year earlier - and Josh Donaldson being injured practically the whole year, they were ne ver in the race, although the Orioles were so bad that finishing last was never a possibility. It made for a rather uninteresting season for the fans and attendance declined markedly at the Rogers Centre. Upper management finally bit the bullet and began to lay the ground for a rebuild and in late August Gibbons made it clear that he was not the man the team was looking for if integrating young players into the line-up was going to be the main objective the following. He did play the youngsters extensively starting in mid-August, but it was clear to everyone that a chapter in Jays history was about to close. On September 26th, the Jays confirmed that Gibbons would not be back after the season.