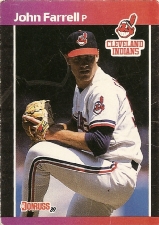 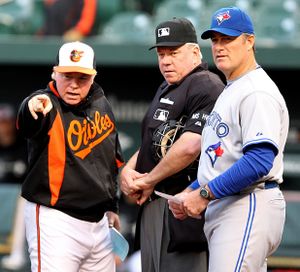 Buck Showalter (left) and Farrell in 2012

Pitcher John Farrell was signed as a 2nd round pick in the 1984 amateur draft by the Cleveland Indians and scout Red Gaskill.

After his playing career ended, Farrell spent several seasons working in the Indians' front office. In 2004 he was the Indians' director of player development. He was named Boston Red Sox pitching coach for the 2007 season. He would serve in the position for four seasons. Farrell led the Red Sox to an ERA title in 2007, and the club had a 4.25 overall ERA during his tenure, ranking 5th in the American League. The Boston Chapter of the BBWAA selected Farrell as the winner of the Red Sox Good Guy Award in 2009.

Hoping to build upon his expertise with pitchers, the Toronto Blue Jays presented him as their new manager on October 25, 2010, replacing the departing Cito Gaston. He spent two seasons at the Jays' helm. 2011 was promising, as the team played for .500 and seemed to be close to breaking out into the leaders' pack in the AL East. However, the season ended on a down note for Farrell, as he had to take a leave of absence from the team because of pneumonia on August 25th and was replaced by coach Don Wakamatsu. In 2012, the Jays started well, but injuries, especially to pitchers, took their toll, and they progressively fell back in the standings, finishing only ahead of the Red Sox, who had an even more difficult season. Indeed, Red Sox manager Bobby Valentine resigned after only one season at the helm, and GM Ben Cherington had only one person in mind to replace him - Farrell. The announcement was made on October 20th, with the Blue Jays receiving infielder Mike Aviles in compensation for allowing their skipper to leave with a year left on his contract.

His first season at the helm of the Red Sox in 2013 was out of a fairy tale, as he turned the club completely around, leading them not only to a division title but to their third World Series triumph in ten years when they defeated the St. Louis Cardinals, 4 games to 2. However, things went badly form the start in 2014 as the Sox quickly fell off the pace and ended up in last place in the AL East after getting rid of a slew of veteran players during the season. However, at the end of the season, Major League Baseball appointed him as manager of an All-Star squad that toured Japan to play a five-game series against the Japanese national team. Ron Washington was initially slated to hold the position, but he resigned from his position as manager of the Texas Rangers in September. 2015 was another tough season, as in spite of making a number of moves during the off-season, the Red Sox were once again unable to keep pace with the other teams in the AL East and quickly fell to last place in the standings. Then on August 14th, Farrell announced that he was afflicted with a form of lymphoma and that he would take a leave of absence for the rest of the season in order to undergo treatment. He added that the cancer was "highly curable" and that he planned to be back in time for spring training in 2016. On October 22nd, the Red Sox announced that the treatment had been successful and that the cancer was in remission.

In 2016 and 2017, Farrell returned to lead the Red Sox to back-to-back division titles, something unprecedented in their history (they had won back-to-back American League pennants in the the early decades of the 20th century however. They made a quick exit from the postseason both years, however, being swept by the Indians in the Division Series the first year, and losing to the Houston Astros, 3 games to 1, also in the ALDS in 2017. Ironically, he was ejected in the early stages of Game 4 of the 2017 ALDS for arguing balls and strikes, which turned out to be his final appearance in a Red Sox uniform as the team announced on October 10th that he would not be returning in 2018.

In March 2018, he joined the Cincinnati Reds, the organization for which his son Luke Farrell was under contract, as a scout. His assignment was to evaluate players on his own team with a fresh eye.

Farrell is the father of infielder Jeremy Farrell who is in the Pittsburgh Pirates organization, Shane Farrell who pitched for Marshall University and became a scouting assistant for the Chicago Cubs, and Luke Farrell, who reached the major leagues in 2017. When Luke made his debut on July 1st that year, John took a one-day leave of absence from managing the Red Sox to be present in Kansas City for the occasion. He is the son of Tom Farrell, Indians farmhand from 1953 to 1955.