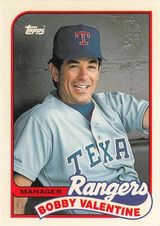 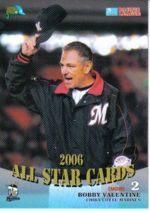 Bobby Valentine has Dodger-blue bloodlines. A first-round draft pick by the Los Angeles Dodgers in 1968, Valentine was one of the most heralded prospects in the august organization's history. He played for Tommy Lasorda with the Ogden Dodgers and Spokane Indians in the Dodgers' system and for Walter Alston in the majors. And he would marry Mary Branca, daughter of longtime Dodger pitcher Ralph Branca.

As a player, Valentine was a great talent, the kind of kid who plays shortstop on any team he finds himself on because he's just plain more athletic and more skilled than his peers. He would play every position in the major leagues except pitcher. He was a baseball star in high school, but also a football star (recruited by the University of Southern California) and a sprinter. Valentine was an exceptionally gifted ballroom dancer in his youth.

After a few weeks in rookie-league Ogden in 1968 - long enough to win his league's MVP award -, Valentine jumped to AAA Spokane in 1969 at the age of 19, and found himself a major-league call-up near the end of the 1969 season. Back in Spokane for more seasoning in 1970, Valentine hit .340 with speed and power, and was league MVP again. He was probably the best prospect on Lasorda's Pacific Coast League champions, even though the team also included the core of future Dodger pennant winners: Bill Buckner, Steve Garvey, Davey Lopes and Bill Russell. But even in his minor-league days, Valentine compiled an ugly injury history, including beanings and knee injuries. 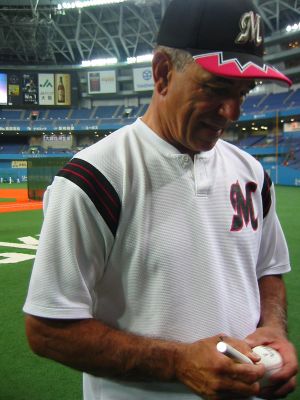 Valentine spent two years with the Dodgers in 1971 and 1972, acquitting himself passably as a utility player but showing none of the dominance he had displayed at lower levels. He found himself bundled into a massive trade in the fall of 1972 that brought star pitcher Andy Messersmith to the Dodgers from the California Angels.

In Anaheim, Valentine started 1973 as the Angels' shortstop and hit over .400 for most of April. He took over center field duties in mid-May. But on May 17th, Valentine ran into the center field fence in Anaheim while trying to haul in a drive by the Oakland Athletics' Dick Green. His leg was severely broken. His season was over, and with it, his chances at major-league stardom. Ironically, Valentine began his career with the Angels with the unlucky uniform number 13. In the two seasons he wore it, he suffered a broken jaw and a broken nose in addition to the broken leg. In 1975, he switched to number 11.

Valentine hung on as a utility player through 1979. He coached for the New York Mets, who had employed him briefly as a player in the late 1970s, and then was named manager of the Texas Rangers in midseason in 1985.

Valentine managed in Texas for most of eight seasons as part of a stable front-office team that included general manager Tom Grieve and innovative pitching coach Tom House. Valentine rode a young lineup and even younger starting pitchers Ed Correa, Bobby Witt, and Jose Guzman to a winning record in 1986, and later in his tenure took a young core bolstered by star acquisitions like Nolan Ryan and Julio Franco to consistent ... well, consistent mediocrity, which was at least an improvement on the consistent awfulness of the early-1980s Rangers.

As a manager, Valentine was combative, talkative, the center of attention. He tried odd things to get players' attention, and rode young players hard, perhaps forcing them into roles that stretched their talents too much - playing doughy slugger Pete Incaviglia in center field, for instance. In 1988, Valentine demoted rising stars Oddibe McDowell, Jerry Browne, and Witt to the AAA Oklahoma City 89ers for perceived lack of hustle and concentration. Though just average as an in-game strategist, Valentine was obviously a good judge of talent; many major-league stars broke in under his tutelage, including Ruben Sierra, Ivan Rodriguez, Juan Gonzalez and Dean Palmer.

Fired in 1992 after compiling an overall .490 mark in Texas, Valentine briefly coached for the Cincinnati Reds and managed the AAA Norfolk Tides in the Mets' organization. In 1995, Valentine went to Japan and managed the Chiba Lotte Marines. He led the club to a 69-58 record and a second-place finish in his only season with the team. Back with Norfolk after that venture, Valentine was promoted to manage the troubled New York Mets in 1996.

The Mets had been floundering since their most recent glory days under Davey Johnson in the late 1980s. Stocked with talent and loaded with cash, the team had played very indifferent baseball at best. Valentine took them to five straight winning seasons and to the 2000 National League pennant when the Mets faced the New York Yankees in the World Series. Though his baseball roots were in L.A., Valentine, a Connecticut kid, seemed made for the New York media circus. He grabbed headlines, acted as a lightning rod, and fulminated on his own, as when he sneaked back into the dugout in disguise after one notable ejection. He feuded with Rickey Henderson and wrestled Carl Everett. And as soon as the club dipped below .500, he was gone, but he brought undeniable success to Flushing for the first time in years: success that evaporated when he left.

Valentine did commentary for ESPN for a while after the Mets fired him, and then went to Chiba Lotte again in 2004 for a second term as manager. As a manager he remains a bit of a puzzle; he shares many characteristics with quick-fix managers like Johnson, Billy Martin, and Dick Williams, who tend to wear out their welcome quickly, but he also learned organization-man behavior with the Dodgers, and was able to hold his Texas and New York managerial jobs for respectable stretches. Perceived as a bit of a maverick in Japan because he bucked some of the intensely disciplined training regimes there, but has nevertheless invited back to manage again, and held his own in a very different work culture there. He became the first foreign manager to lead a club to a Japan Series title in 2005. He was honored with the Matsutaro Shoriki Award that year, becoming the first Chiba Lotte representative and first foreigner to win the award.

On November 30, 2011, he was named to succeed Terry Francona as manager of the Boston Red Sox. He was back working at ESPN at the time and had not originally been among the contenders for the job, as the Red Sox interviewed candidates with a lower profile, but unhappy with their first choices, they switched gears and selected the media-friendly Valentine. However, the 2012 season proved very trying for Valentine and the Red Sox. Expected to compete for a postseason spot, the Red Sox instead were shaken by repeated bullpen meltdowns in the early season, poor performances by their starting pitchers, especially Josh Beckett and Jon Lester, and a steady fall in the standings that saw them finish in last place. Boston icons Kevin Youkilis and Beckett, as well as the high-priced Adrian Gonzalez and Carl Crawford, were traded before the end of the season, and the team finished the year with a patched-up line-up among recriminations. Valentine was widely criticized for tensions in the clubhouse, and submitted his resignation as soon as the season was over. In his autobiography published in 2017, DH David Ortiz thoroughly panned Valentine's leadership style, saying that he let his ego get in the way of results, and was too preoccupied with trying to demonstrate how much smarter he was than everyone else. After the season, he returned to the broadcast booth as a commentator with NBC Sports Radio, then in the spring of 2013, accepted the position of Athletic Director at Sacred Heart University.

Valentine operates a restaurant in Stamford, Connecticut, and also spent many years running and holding court at a rib house in Arlington, Texas. He is a well-respected serious collector of baseball memorabilia. In 2011, he was named Director of Public Safety for the city of Stamford. While the title was understood to be an honorary one, that's not how Valentine saw it: he was out directing traffic around town in the early morning that winter. In December of 2016, his name emerged as being on the short-list of candidates being considered by President-elect Donald Trump to be United States Ambassador to Japan. The fact he had spent a number of years as a manager in Nippon Pro Baseball was apparently all the qualifications needed to be considered for the sensitive diplomatic appointment.