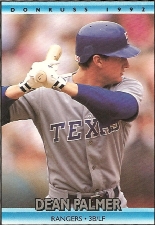 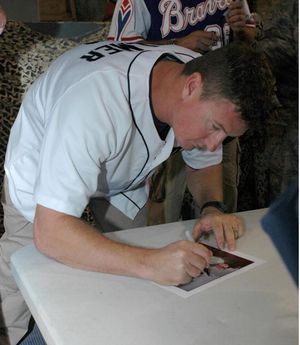 Dean Palmer was a slugging third baseman who played 14 seasons in the big leagues, all in the American League. He struck out a lot, and was # 82 on the all-time list for most strikeouts as of June 2007. He reached his peak performance - in terms of rate stats - in a partial season in 1995 when he hit .336 with 9 home runs in 36 games for the Texas Rangers. An injury interrupted his season at a time when he was one of the dominant players in the league.

He began playing in the minors at age 17, and hit the majors at age 20.

Lonestarball.com [1] ranks Palmer as the #40 top Ranger of all time, and has an extensive biography. [2]