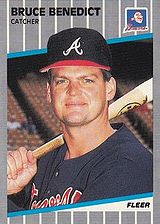 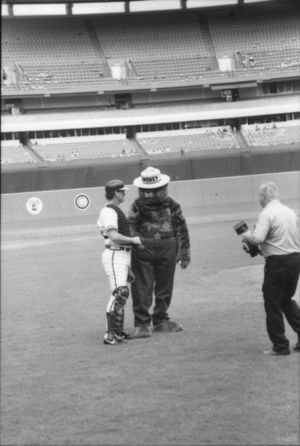 Benedict with Smokey the Bear in 1988

Catcher Bruce Benedict spent his entire 12-year major league career with the Atlanta Braves. A light-hitting backstop whose strength was defense and his ability to run a pitching staff, he was twice an All-Star, in 1981 and 1983. 1983 was his best season, as he hit .298 and drew 61 walks for a solid .385 on-base percentage in a career-high 134 games. He had almost no power though, never hitting more than 5 homers or 14 doubles in a season.

His father, Dave Benedict, was a minor league pitcher from 1950 to 1958, and a coach at the University of Nebraska at Omaha. His son, Griffin Benedict, played in the minors and was the bullpen catcher for the San Diego Padres.