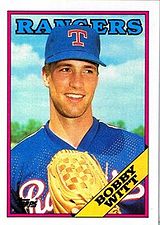 Witt did not turn out to be the second coming of Ryan, however. He had his worst season in 1991 (3-7, 6.09) and while he bounced back in 1992, going 10-14, 4.29. But the Rangers had soured on him by then, and on August 31st, he was included in a blockbuster trade with the Oakland Athletics that sent him, P Jeff Russell and OF Ruben Sierra to the A's in return for OF Jose Canseco. The A's went to the postseason that season, but he pitched just one inning in relief as the A's were eliminated by the Toronto Blue Jays in the 1992 ALCS. He spent two more seasons with Oakland, his best coming in 1993 when he was 14-13, 4.21, then began bouncing around, including another stint with the Rangers from 1995 to 1998.

On June 30, 1997, Witt became the first American League pitcher in 25 years to hit a home run. It came off Ismael Valdez in an interleague game at Dodger Stadium. It was also the first home run by a pitcher in Rangers history, as no pitcher had gone deep in the one season the Rangers were in existence before the introduction of the designated hitter in 1973. It would be almost 20 years before another Rangers pitcher hit a homer, with Yu Darvish pulling the trick in 2016. Witt finished his career with the Arizona Diamondbacks in 2001, the year they won the World Series. He was 4-1, 4.78 in 14 games (7 starts) that season, then pitched in a couple of games in relief in the postseason. he thus ended his career with a World Series ring.

Witt's brother Doug Witt has been a bullpen catcher and a scout. His daughter Nikki married pitcher James Russell, whose father Jeff had been a teammate of Bobby's. His son Bobby Witt Jr., a high school shortstop, was the second overall selection in the 2019 amateur draft. With Bobby having gone third overall in 1985, they now formed the highest drafted father-son combination in history.