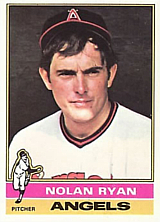 "Each time I saw Nolie Ryan, I wrote down the same thing. BEST arm I ever saw ANYWHERE in my life!!" - Red Murff, the scout who signed Ryan

Nolan Ryan is a Hall of Fame pitcher and strikeout artist who is one of the most beloved baseball players of all time. He holds the record for most strikeouts of all-time with 5,714, almost 1,000 strikeouts more than #2 on the list, Randy Johnson (4,875). Nolan holds a variety of other records, including most no-hitters of all-time (7!) and most one-hitters of all time (12, tied with Bob Feller). He formerly held the record for the fastest "officially recorded" pitch thrown in a baseball game at 100.9 miles per hour (unofficially his fastest pitch was 102.5 miles per hour). While his posted speed has since been exceeded, it must be remembered he was pitching in triple digits at a time when hardly any pitchers even reached 90 mph on their fastball. Ryan had 37 complete games in his career in which he allowed 2 hits or fewer, which is more than any other two pitchers combined (Jim Palmer and Jim Maloney are second with 17 each). Nolan had a somewhat mediocre .526 winning percentage (324 wins, 14th all time, and 292 losses), which was less team-dependent than almost any other pitcher: his approach was always to challenge every hitter with his best stuff, leading sometimes to great results and sometimes to his getting beat, especially as he put more men on base through bases on balls than anyone else in history. In another similar feat, he managed to strike out at least 75 batters in a calendar month five times, including the all-time record of 87 in June of 1977; only three other pitchers have ever had a 75-strikeout month: Sandy Koufax, Sam McDowell and Chris Sale.

"...That kid had to be the laziest sonofagun I ever saw. He was like an old hound on the porch: Nolan Ryan wouldn't roll over to get in the shade. So how the hell could any of us realize he'd come to big league camp, see Tom Seaver's work habits, and have a conversion? Overnight, he became the hardest-working I ever saw. For a quarter century, Nolan Ryan never stopped applying himself. " - Whitey Herzog in You're missing a Great Game 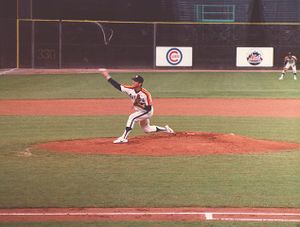 Nolan recorded a save in Game 3 of the 1969 World Series while pitching for the New York Mets. This was the only World Series game in which he appeared. He was signed by the Mets and developed as one of a number of great young hurlers who hit their stride in the Miracle Mets season of 1969, along with Tom Seaver, Jerry Koosman and Gary Gentry. However, before the 1972 season, Ryan was traded to the California Angels for infielder Jim Fregosi in a deal bitterly regretted by Mets fans. He promptly became a star on the West Coast as Fregosi immediately entered a swift decline.

In 1973, Ryan eclipsed Sandy Koufax's single season record for strikeouts, recording 383, a mark which still stands. 1973 was also the first year of the designated hitter, which has led some people to speculate that he could have had 400 strikeouts had he been able to face his fellow pitchers instead of DHs. In 1978 he set the American League record by striking out a total of 25 batters in his first two games of the season; that stood until 2020, when Shane Bieber managed 27 strikeouts in his first two outings of the year. He also set the record for the first four games of a season, with 48; Biener tied that one in 2021 as well, then five days later, on April 23rd, Jacob deGrom erased the mark by getting 50 Ks in four games. For much of his career, Ryan struggled to control his blazing fastball, resulting in his being the all-time wild pitches leader with 277; he led the league in wild pitches 6 times, and would regularly lead the league in bases on balls. His control improved as he got older, but his fastball remained among the best in baseball well into his forties. He could still throw upwards of 95 miles per hour when he retired, but he was bothered by leg and hip injuries after pitching 27 seasons in the majors.

A fond memory of Nolan for some, coming in his final season, saw him pummel Chicago White Sox third baseman Robin Ventura, who was nearly half his age. On August 4, 1993, the 46-year-old Ryan hit Ventura with a pitch, leading to the younger man charging the mound. Ryan promptly locked him in a headlock with his left arm and rained six punches down on Ventura's head with his pitching hand before Ivan Rodriguez could reach the fracas and pull Ventura away. Improbably, Ryan was not ejected and finished the game, holding the Pale Hose hitless the rest of the way.

Nolan Ryan is the only player to have his number retired by three clubs. His #30 is retired by the Angels; #34 is retired by the Houston Astros and Texas Rangers. Of course, Jackie Robinson's #42 is retired throughout professional baseball. Ryan was the first player to have played for the four original expansion franchises (Angels, Astros, Mets, Senators/Rangers). Darren Oliver joined him in 2007. His warm-up music between innings while on the mound was "Don't Go Breaking My Heart" by Elton John & Kiki Dee.

He was elected to the Baseball Hall of Fame on January 5, 1999 by the Baseball Writers Association of America with what was at the time the second highest percentage of votes all time (98.7% of ballots). He has also been inducted into the team Hall of Fames for the Angels, Astros and Rangers. His first baseball card appearance was in the 1968 Topps set.

"Some guys throw hard, but not every pitch like him. He does it for nine innings. I think he has got to be the biggest superman in the league." - Tony Oliva, 1973

Ryan as shown in the Fitness Guide

After retiring, Ryan promoted physical fitness. His likeness has been used in the "Nolan Ryan Fitness Guide", published by the The President's Council on Physical Fitness and Sports in 1994. He returned to the game of baseball first as a minor league team owner, creating the Round Rock Express of the Texas League in 2000. The venture was a huge success, and the team moved up to the AAA Pacific Coast League in 2005. He worked as a special assistant to the General Manager of the Houston Astros from 2004 until 2008. Ryan was then hired by Texas Rangers owner Tom Hicks to serve as team president in 2008. He was also involved in on-field decisions in this capacity, pushing for a different approach to pitching that would favor hurlers who can pitch deep into the game. The team's pitching improved significantly in 2009 after years of mediocrity, although this may have been merely a coincidence.

In late 2008, Hicks's business fortunes suffered a serious downturn with the economic crisis that hit the United States, and he put the team up for sale a few months later. Ryan and Pittsburgh attorney Chuck Greenberg headed a consortium of business persons who purchased the franchise on January 23, 2010, with Ryan continuing as Team President. The sale was derailed when some of Hicks's creditors objected to it in US Federal Bankruptcy Court, but was re-confirmed on August 5th when the group led by Greenberg and Ryan made the winning bid a special bankruptcy auction held by the court. The Rangers were having at that point the best season in franchise history, and reached the World Series for the first time in 2010, losing to the San Francisco Giants in five games. In the offseason, tensions appeared between Greenberg and the other members of the ownership group, stemming from Greenberg's desire to be very involved in day-to-day baseball decisions. Things came to a head on March 11, 2011 when Greenberg was forced to step down in favor of Ryan, who became Chief Executive Officer and managing partner of the team.

The Rangers returned to the World Series in 2011, only to lose a heartbreaking seven-game series to the St. Louis Cardinals, with Ryan getting a lot of credit for turning around the entire organization. After an early exit from the postseason in 2012, questions began to be raised about Ryan's future role with the team, especially as GM Jon Daniels and Chief Operating Officer Rick George were both promoted to the rank of President; in turn, Ryan gave up the title but the two were quick to point out that Ryan remained their boss. Still, there was talk all over Texas that Ryan had in effect been shunted aside and would likely resign from having a leading role with the Rangers in short order.

On May 17, 2013, his son Reid Ryan was named team President of the other Texas team, the Houston Astros, taking over for George Postolos. On October 31st, Nolan Ryan stepped down from his remaining duties with the Rangers, explaining that he was a doer and did not want to continue in a role in which he was simply a figurehead. As he explained: "There was a segment of people I didn't enjoy dealing with. We were on opposite pages, and they had an agenda." In effect, he did not get along with members of a front office which valued sabermetrical analysis over Ryan's more old-style approach. On February 11, 2014, he rejoined the Astros as an executive adviser, providing advice to owner Jim Crane, GM Jeff Luhnow, and his son Reid.

His wife's name is Ruth, and his three children are Reid, Reese and Wendy. [1]

The no-hitter in 1981 set the major league record for most no-hitters.