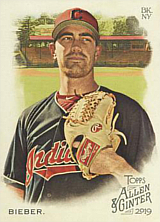 Pitcher Shane Bieber was selected by the Cleveland Indians in the 4th round of the 2016 amateur draft. He moved quickly through the organizational ranks after starting with the Mahoning Valley Scrappers of the New York-Penn League his first year, when he had an ERA of 0.95 in 24 innings. In 2017, he was successively with the Lake County Captains, Lynchburg Hillcats and Akron Rubber Ducks, going a combined 10-5, 2.86 in 28 games while pitching 173 1/3 innings. He also had an eye-popping K/BB ratio of 162/10. In 2018, he was back at Akron to begin the season, but after putting up an ERA of 1.16 in 5 starts, he earned a promotion to the AAA Columbus Clippers. He continued his domination of minor league hitters, with an ERA of 1.05 in 5 starts. On May 25th, he pitched a rain-shortened seven-hitting no-hitter over the Gwinnett Stripers, striking out 7 and walking none. His mastery of the strike zone was unabated, as he had 61 strikeouts and 3 walks in 65 1/3 innings.

On May 28, 2018, less than two years after he had been drafted, Shane was promoted to the bigs, with his first start, a one-off outing designed to give Trevor Bauer an extra day of rest, scheduled for May 31st, his 23rd birthday. He pitched 5 2/3 innings, giving up 4 runs, and was not involved in the decision as Cleveland defeated the Minnesota Twins, 9-8. Shane was just the 6th player to make his debut on his birthday as a starting pitcher and the first since Edwin Jackson in 2003. He earned his first win on June 17th, 4-1, over the Twins, when he was called up for an emergency start and allowed just one run in 5 2/3 innings. In 20 appearances, including 19 starts, he went 11-5, 4.55 with 118 strikeouts in 114 2/3 innings. He was not used in the postseason. In 2019, he was inserted into the starting rotation after one early relief outing and was excellent in his first three starts, winning twice and allowing just 9 hits in 19 innings. He slowed down a bit after that, but on May 19th, he pitched an absolute gem as he recorded his first career shutout, 10-0, over the Baltimore Orioles, striking out 15 and walking none. He was named to the All-Star team as a replacement for Charlie Morton, who was unable to pitch due to the Sunday Starter rule. He made the most of his opportunity, pitching a perfect 5th inning, during which he struck out all three batters he faced in order: Willson Contreras, Ketel Marte and Ronald Acuna. He was named the winner of the Ted Williams Award as the game's MVP. He pitched another shutout, this one a one-hitter, when he defeated the Toronto Blue Jays, 1-0, on July 24th. The sole hit was a 7th-inning double by Eric Sogard, and he struck out 10 batters and walked just one. On August 4th, he threw his third complete game of the season in a 6-2 win over the Los Angeles Angels, becoming the first pitcher with that many since teammate Corey Kluber and Ervin Santana in 2017. In 34 games (33 starts), he fashioned a 15-8, 3.28 line and 4.9 bWAR mark with a robust 259 strikeouts in 214 1/3 innings. He finished fourth in the voting for the 2019 American League Cy Young Award.

Given his success the previous season, Bieber was an obvious choice to be the opening day starter for the Indians in 2020, even if that day was delayed by almost four months until July 24th due to the coronavirus pandemic. He was at his best and looked very much the ace, striking out 14 in 6 innings in a 2-0 win over the Kansas City Royals. He then followed that on July 30th with 13 Ks in 8 scoreless innings in a 2-0 win over the Minnesota Twins. The 27 strikeouts tied the major league record, set by Karl Spooner in his first two career starts in 1954, for most K's in a pitcher's first two games of the season. The American League record had been 25, held by none other than Nolan Ryan. He continued to set records in the following weeks: on August 31st, he pitched his 50th inning of the year, at which point he had struck out 82 batters, setting another mark. He was named the American League Pitcher of the Month for August, thanks to a record of 4-0, 1.63 with 57 Ks in 38 2/3 innings. On September 11th, he recorded his 100th strikeout of the year in a 3-1 loss to the Minnesota Twins. It had taken him just 62 1/3 innings, the fewest by a starting pitcher since at least 1900. Max Scherzer had set the previous record with 63 innings in 2018. He finished the year by winning the Pitcher's Triple Crown, leading the AL in the three most prominent pitching categories: wins (8), strikeouts (122) and ERA (1.63). In fact, he led the major leagues in all three categories. He was the first pitcher since Justin Verlander in 2011 to win a Triple Crown. He was then named the unanimous winner of the 2020 American League Cy Young Award. However, in his sole postseason start against the New York Yankees in Game 1 of the Wild Card Series, he gabe up 7 runs on 9 hits in 7 2/3 innings and was charged with a loss.

He started the 2021 season with a couple of so-so performances, giving up 5 runs in 12 1/3 innings, although with plenty of strikeouts, but in his third outing on April 13th, he was the real deal, reeling 9 shutout innings, in which he gave up 3 hits and 1 walk and struck out 11. He received credit for the Indians' 2-0 win when his teammates scored a pair of runs for him in the 10th. With his next start on April 18th, he became the first pitcher since 1893 to strike out at least 10 batters in each of his first four starts in a season. He had 13 Ks in 8 innings in a win over the Cincinnati Reds that day. It was also his sixth consecutive double-digit strikeout performance dating back to the previous season (not counting his postseason start), for an Indians record, and his 48 Ks in his first four starts tied him with Nolan Ryan in 1978. That record did not hold for long, as on April 23rd, Jacob deGrom struck out 15 batters in his fourth start of the year to push the record to 50.

He is no relation to Canadian pop singer and teen idol Justin Bieber, but gets a lot of ribbing due to their shared last name. He used the name "Not Justin" as his nickname during the players' weekend in 2019. He is one of the few pitchers of his generation to throw a screwball as part of his regular arsenal.