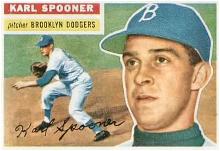 Pitching for the Brooklyn Dodgers, Karl Spooner set the record for most strikeouts in a debut, with 15 against the New York Giants on September 22, 1954. J.R. Richard now shares that record. He then struck out 12 against the Pittsburgh Pirates in the next game. Both games were shutouts and those were his only two major league outings his first season.

He had some arm troubles in 1955 after hurting his shoulder in spring training, but managed to go 8-6 with an 3.65 ERA and 2 saves. He even hit .286. He appeared in 2 World Series games, losing his only start in Game 6, in the year when the Dodgers finally won the World Series. They were his last major league appearances, due to his arm problems.

In the minors, he had notable performances going 11-6 in a partial season with the Pueblo Dodgers in 1953 and going 21-9 with the Fort Worth Cats of the Texas League in 1954 (and then winning two more with the Dodgers at the tail end of that season).

After baseball, he worked as a packing-house manager for the Haffield Citrus Corporation and lived in Vero Beach, FL. He died at the age of 52.