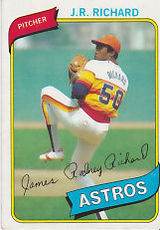 A powerful pitcher who twice struck out over 300 in a season, J.R. Richard suffered a stroke shortly after appearing in his first All-Star Game in 1980. After a long recovery, he attempted to make a comeback but never pitched in the major leagues again. He briefly found himself living under a bridge [1] as he adjusted to life after baseball. He was known as both "J.R." and "James Rodney" Richard during his playing days, although the "J.R." form is best remembered now, the name having been made famous at the end of the 1970s by the lead character on the extremely popular television series Dallas.

Richard was a first-round pick (#2 overall) in 1969 and pitched in the minors from 1969 to 1974. In 1971 with the Oklahoma City 89ers, he had a 2.45 ERA, a record of 12-7, and 202 strikeouts in 173 innings. He was one of the tallest pitchers in baseball in the 1970s, standing 6'8" and was built like a football player. One opponent said that when he pitched, it looked as though he could simply stretch and hand the ball to the catcher. He used his large frame for leverage, throwing one of the best fastballs of the era, and becoming better each season as his control and understanding of the subtleties of pitching improved. He was becoming a major star when his career ended abruptly.

In his first major league game on September 5, 1971 (Boxscore), Richard struck out 15 batters in the second game of a doubleheader aganst the San Francisco Giants at Candlestick Park, tying the record for most strikeouts in a debut set by Karl Spooner of the Brooklyn Dodgers against the New York Giants on September 22, 1954.

1980 started as a terrific year for Richard. His stats for the year were a 1.90 ERA and a 10-4 record in 17 starts. Shortly after his appearance in the 1980 All-Star Game, he took himself out of a game against the Atlanta Braves on July 14th, complaining of nausea and numbness in his arm, and was placed on the disabled list. The Astros accused him of malingering after early tests proved inconclusive. He collapsed while throwing on the sidelines on July 30th, the victim of a massive blood clot, but his life was saved. He would never pitch in the major leagues again, however, and the Astros were much chastised for the shabby treatment given to his medical complaints.

While coming back from his injury, Richard pitched a number of games in the minors in 1982 and 1983. He was placed on the major league roster in September of 1982, although there was never any thought of using him in a game. He suffered from blurred vision and slowed reflexes as a result of his stroke, and there was much concern that he could not react properly if ever a line drive was hit back to the mound.

After living through some difficult times, Richard became a member of the Texas Southern University coaching staff in Houston, TX. A movie about his life appeared in 2005: Resurrection: The J.R. Richard Story. In 2014, he was one of the guest speakers at a roundtable discussion on baseball and civil rights organized by Major League Baseball as part of the annual Civil Rights Game festivities, held in Houston, TX that year. He died in 2021 at age 71. According to his former teammate Enos Cabell, Richard died from COVID-19 after refusing requests from him to get vaccinated.