Logo of the historic Fort Worth Cats 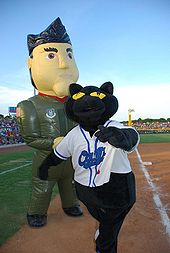 In 1956, the Brooklyn Dodgers traded the Ft. Worth franchise to the Chicago Cubs for the Los Angeles Angels, effectively giving the Dodgers territorial rights to L.A., which they obviously used in 1958.

In 1959 the team joined the expanding American Association and went 81-81, 5th in the 10-team league. In 1960 they merged with the Dallas Rangers to form the Dallas-Fort Worth Rangers.

After a few years as a combined entity, the clubs were separated again for one year in 1964. With Dallas remaining in the PCL, the Fort Worth Cats were the worst team in the Texas League with a record of 51-89. The club did have a future solid major leaguer in Fred Norman, but he was a wretched 1-8 with a 6.95 ERA that season. In 1965 they merged again with Dallas and became the Dallas-Fort Worth Spurs.

The Cats were revived in 2001 as part of the short-lived All-American Association and went 37-35 to finish fourth of six teams. The club then switched over to the Central Baseball League. They moved back into a re-built LaGrave Field, located exactly where the previous ballpark had stood. In 2002, they finished dead last, going 36-60. The team improved over time and in 2005 they won the first-half flag, the second-half title (30-17 each half) and then won the post-season as well under manager Wayne Terwilliger. The Cats switched leagues again in 2006, joining the new American Association, where they captured the circuit's inaugural championship and repeated as champions in 2007. They played at LaGrave Field, but did not return after the 2011 season. The Cats joined the North American League in 2012, playing in the Southern Division with other teams from the state of Texas. In 2013, they changed leagues again, playing two seasons in the United League until that circuit folded.