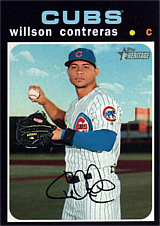 Catcher Willson Contreras made his major league debut as a late defensive replacement for the Chicago Cubs on June 17, 2016. In his first at bat on June 19th, he crushed the first pitch he saw from A.J. Schugel of the Pittsburgh Pirates for a two-run pinch homer. In 76 games, he hit .282 with 12 homers and 35 RBI. In the 2016 World Series, the Cubs followed an unusual pattern in having three different players start a game behind the plate: Miguel Montero, David Ross and Contreras. All three homered during the seven game series against the Cleveland Indians that resulted in the Cubs winning their first title since 1908.

Contreras took over as the Cubs' undisputed starter at catcher in 2017, following Ross's retirement and Montero's relegation to a backup role. On June 26th, Willson accomplished something never done in the 140-year history of the Cubs: he led off a game against the Washington Nationals with a homer off Gio Gonzalez at Nationals Park, the first time in team history that a catcher hit a lead-off homer. Joe Maddon had been experimenting with some unorthodox choices in the lead-off spot in recent weeks, because of injuries and the inability of Kyle Schwarber to produce in the role; slugging first baseman Anthony Rizzo found some success in the role, but with a left-hander on the mound, Maddon pegged the righty Contreras in that particular game. The homer came as Contreras started a huge hot streak: beginning on June 19th and culminating with a two-homer, 6 RBI performance on August 3rd, Contreras hit 13 homers in 35 games. He also hit a scorching .343 from July 9th to August 3rd. His performance coincided with the Cubs waking up from their early season doldrums and taking the lead in the NL Central, as he was the team's most productive hitter during the stretch. It was a huge blow on August 9th when he went on the disabled list with a hamstring problem and was lost until September. Luckily, the Cubs had acquired veteran Alex Avila from the Detroit Tigers at the trading deadline, and rookie Victor Caratini was also available to help out. On September 15th, having returned five days prior, he was handed a two-game suspension for throwing his mask, which bounced and hit umpire Jordan Baker in the leg, after being thrown out of a game along with pitcher John Lackey for arguing a missed third strike call in the first game of a crucial three game series against the St. Louis Cardinals. He appealed the suspension, which was reduced to one game, which he served on September 17th. His absence was not too costly as the Cubs swept the series, giving themselves precious breathing room in the division title race. He finished the season at .276 with 21 homers and 74 RBI in 117 games. In the postseason, he was a combined 7-for-23 with two homers in two series as the Cubs were eliminated in the NLCS by the Los Angeles Dodgers.

Contreras made the All-Star team for the first time in 2018 as he played 138 games for the Cubs and hit .249 with 10 homers and 54 RBI. He was voted the starter by the fans more in recognition for his excellent performance the previous season than for what he was doing that year. The Cubs had a disappointing season, in that they lost out in the final days of the season on a chance to clinch the top seed in the National League in the postseason. Instead, they had to play a one-game playoff with the Milwaukee Brewers for the division title - which they lost - and then lost the Wild Card Game at home, to the Colorado Rockies in extra innings, for a quick postseason exit. Willson went 0-for-3 with a pair of walks in the Wild Card Game. He bounced back in 2019 and made the All-Star team fully on merit, as he hit .286 with 18 homers and 52 RBI in the first half. Only a few days after the game, on July 15th, he went on the injured list with a foot injury. The Cubs immediately acquired veteran Martin Maldonado from the Kansas City Royals to take over in his absence. He returned on July 24th and the Cubs traded the now superfluous Maldonado to the Houston Astros on July 31st to obtain infielder/outfielder Tony Kemp. On August 4th, he was injured again, hurting his hamstring, and this time the Cubs went to the waiver wire, picking up recently released veteran Jonathan Lucroy to fill in in his absence. In 105 games, Willson batted .272 with 24 home runs and 64 RBI.

In 2020, the Cubs returned to the postseason as Contreras appeared in 57 of the team's 60 games during the pandemic-shortened season, as he was regularly used as his team's designated hitter when not starting behind the plate. He hit .243 with 10 doubles and 7 homers, scoring 37 runs and driving in 26 for an OPS+ of 110. He also led the National League in being hit-by-pitch, with 14. In the postseason, he had 8 plate appearances over the two games of the Wild Card Series against the Miami Marlins, but only 4 at-bats since he walked once and was hit by pitch three times, giving him an OBP of .625, as he went 1 for 4 when actually swinging at the pitch. The Cubs lost both games and were eliminated. On April 13th, he put his battery-mate Ryan Tepera in trouble when in a post-game interview, he stated that he had asked him to throw at Milwaukee Brewers pitcher Brandon Woodruff, apparently in retaliation for his having been hit by one of his pitches earlier in the game. Given Contreras' clear propensity to get plunked, this should not have been a surprise to him, but he apparently objected and initiated retaliation. In any case, given the clear evidence, the league had no choice but to issue suspensions two days later: three games for Tepera and one for manager David Ross. Ironically, he was not punished in spite of his evident complicity.

His brother William Contreras, who is also a catcher, made his major league debut in 2020.