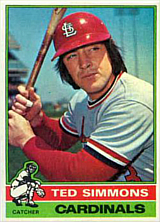 Inducted into Hall of Fame in 2020

"All you ever hear is Bench and Munson and Fisk. (Simmons) hits better than any of them, and he calls a great game." - Chuck Tanner on opposing catcher Ted Simmons

Ted Simmons was a star for 21 seasons in the majors. He was named to 8 All-Star teams and was inducted by the Veteran's Committee to the Hall of Fame in 2020.

As a catcher, he had unusually high batting averages, hitting in the top ten in the league six times. In 1975, playing for the St. Louis Cardinals, he was second in the National League. He broke in just after the second dead-ball era when averages were low, so his averages mean more than they would today. For instance, in 1972, he hit .303 when the league as a whole hit only .248.

Simmons' lifetime batting average of .285 is tied with Hall of Famer Yogi Berra, and better than now fellow Hall of Famers Johnny Bench (.267) and Carlton Fisk (.269). In fact, there was no Hall of Fame catcher who played in Major League Baseball since 1950 who has a batting average as high as the .285 that Berra and Simmons share (until Ivan Rodriguez and Mike Piazza, more recent players, were elected). Some of the players prior to 1950 had gaudy batting averages during the lively ball era. For example, Bill Dickey, famed for his high batting average, was only in the top ten in the league three times (compared to six for Simmons), and his highest finish was 3rd (compared to 2nd for Simmons). And Mickey Cochrane has the highest batting average of any Hall of Fame catcher (.320), but was only in the top 10 five times and never finished as high as Simmons' second-place finish.

Simmons has 2,472 lifetime hits, more than any fellow catcher in the Hall of Fame (except Rodriguez, who recently got in). The closest is Carlton Fisk with 2,356. Yogi Berra had 2,150.

Simmons' power was excellent for a catcher. He hit 483 doubles lifetime, which is tied for 81st on the all-time list. There is no other Hall of Fame catcher who had as many doubles as Simmons (other than the recently-admitted Rodriguez again). Carlton Fisk, in a longer career, had 421. Ted also had 1,389 RBI in his career (beating both Rodriguez and Piazza). That total is higher than every catcher in the Hall of Fame, except for Yogi Berra, who had 1,430. Yogi, like Simmons, also played several hundred games at positions other than catcher. He also cranked 248 home runs in his career. Only four of the other fourteen Hall of Fame catchers have hit more (plus the recently-admitted Rodriguez and Piazza). Gary Carter, who had 324 home runs, had a slugging percentage of .439, only two points higher than Simmons, because Simmons had so many more singles and doubles than Carter.

Simba never won an MVP, but did finish as high as 6th in the MVP voting in 1975, a year in which his team barely finished over .500. Simmons' best years were unfortunately spent with a St. Louis Cardinals team that could not win the division title. The team did win the pennant when he was an 18-year-old rookie in 1968, but he appeared in only 2 games (hitting .333) and did not appear in postseason play.

Ted had an extremely long career at catcher, playing 1,771 games at the position and adding several hundred games at DH, first base, third base, and in the outfield. Bob Boone and Carlton Fisk, his contemporaries, set records at the position with over 2,200 games. He was considered adequate defensively, but won no Gold Gloves. During most of Simmons' career as a catcher, Johnny Bench won the Gold Glove for National League catcher every year, so winning the Gold Glove at the time was darn near impossible.

He did finally get into the 1982 World Series in his days with the Milwaukee Brewers, with the famed "Harvey's Wallbangers". In the 1982 regular season, Simmons usually batted fifth during the first half of the season and was usually the clean-up hitter during the second half. He almost Merkled away the 1982 AL East title on a rainy night in Baltimore. In the 3rd inning of a Brewers-Baltimore Orioles game on June 16th, with runners on first and second with one out, Pete Vuckovich struck out John Lowenstein. Simmons received the pitch and, thinking it was the third out, rolled the ball back to the mound and began to walk off the field. The Oriole runners, Dan Ford and Eddie Murray, each advanced. Joe Nolan then singled both runners home before making the true third out trying to stretch the hit to a double. When the Oriole 9th ended, those were the only two runs the Orioles had, and the score stood tied at 2 (Terry Crowley being unable "to break one open in the 9th"). The game went into its second delay and was finally called after midnight. The game was replayed as part of a doubleheader on the last Friday of the season. The Brewers held a three-game lead over Baltimore with four to play that weekend and proceeded to blow that lead by losing both ends of the doubleheader as well as the Saturday game. Finally on Sunday, the Brewers saved Simmons from an ill fate by winning in the only final day matchup of future Hall of Fame pitchers to decide a pennant: Don Sutton vs. Jim Palmer.

Simmons is second in post-19th Century catchers in most passed balls in a career with 182. He trails Lance Parrish. This despite not catching any notorious knuckleball pitchers. His 34% success-ratio in throwing out base stealers ranks low among his peers.

After his playing career ended, he was the director of player development for the Cardinals from 1989 to 1991 and General Manager of the Pittsburgh Pirates from 1992 to 1993. Simmons left the job due to health problems. While working as a scout for the Cleveland Indians he was a finalist for the Tampa Bay Devil Rays first managerial opening, but lost out to Larry Rothschild. He resurfaced with the San Diego Padres front office from 2000 to 2003 in the player development/minor leagues/scouting department. On October 30, 2007, he was named bench coach of the Milwaukee Brewers for the 2008 season. He held the same position for the San Diego Padres in 2009 and 2010. In 2011-2013, Simmons was a Senior Advisor to the General Manager for the Seattle Mariners.

There was a movement to get the Veterans Committee to let him into the Hall of Fame. See Why Ted Simmons Belongs in Cooperstown. He was on the Committee's ballot for the 2018 Hall of Fame Election but fell one vote short of election, receiving 11 of 16 votes when 12 were needed for enshrinement in Cooperstown. His solid showing was very encouraging for a future vote. Ted was again on the ballot in 2020 and finally received his long overdue honor, receiving 13 of 16 votes for July 2020 enshrinement.