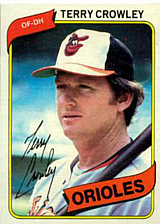 Terry Crowley was a left-handed hitter who had a long career primarily as a pinch-hitter and designated hitter. His lack of a defensive position meant that he had to hit a lot to justify a spot in the lineup, but his power was limited. What he could do was hit line drives and get on base when facing right-handers (against left-handers, he was overmatched and platooned). Most teams found that the negatives eventually outweighed the positives, but for Baltimore Orioles manager Earl Weaver, he was the type of player he used to complement big name stars on very successful teams. Weaver focussed on what Crowley could do - hit righties and pinch hit - and did not ask him to be a complete player, thereby getting good production out of him.

Crowley became a pinch-hitting specialist with the Reds and did fairly well in that demanding role. In 1974, he hit .240/.293/.360, getting 125 at bats in 84 games, and in 1975 he was part of another World Champion team, hitting .268/.333/.394 in 66 games (71 at bats). He made a few starts in right field the first of those two seasons, but made only 8 appearances on defense in 1975. He went 1-for-2 as a pinch-hitter during the classic World Series against the Boston Red Sox. After the season, the Reds obtained Bob Bailey in a trade with the Montreal Expos and Crowley was redundant, as Bailey was very much the same player as Crowley, but with more power. Terry was traded to the Atlanta Braves at the end of spring training in 1976, then, after only 7 hitless games, was released and picked up by the Orioles once again. He spent much of the remainder of the season and most of 1977 with the AAA Rochester Red Wings, playing 51 games in Baltimore over the two years. He hit .364/.391/.545 in limited duty the second year and became a full-time member of the O's the following season.

Crowley was released by the Orioles during spring training in 1983, missing the team's most recent title, and was picked up by the Montreal Expos in late May. The Expos used him almost exclusively as a pinch-hitter. He hit .182/.327/.182 in 50 games and was released for a final time at the end of the season. He ended his major league career with a .250/.345/.375 line in 15 seasons, good for a 104 OPS+ in 1,518 at bats. He hit 62 doubles and 42 homers but only one triple - he never had any speed; not bad for a career pinch-hitter. Crowley's career stat line highlights the specialized player he was - out of 1,768 big league plate appearances only 58 came against left-handed pitchers.

After his playing career ended, Crowley spent many years as a hitting coach for the Minnesota Twins (1991-1998) and the Baltimore Orioles (1985-1988 and 1999-2010). He was a hitting instructor for the O's to begin the 2011 season, then stepped in as interim bullpen coach on June 14, replacing Rick Adair who became pitching coach when Mark Connor retired.

Terry's two sons, Terry Jr. and Jimmy, both played in the minors. In 1995, Crowley Sr. was an inaugural inductee of the Staten Island Sports Hall of Fame.