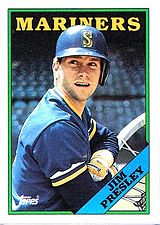 Jim Presley was an eight-year player in the major leagues, playing third base and being named to the All Star team in 1986.

As a youngster, Presley played in the 1974 Dixie Youth World Series. He was signed as a 4th round pick in the 1979 amateur draft by the Seattle Mariners and scout S.E. "Rip" Tutor. Presley spent 1979-1984 in the minors before coming up to the majors for 70 games with the Mariners in 1984. He spent half of 1984 with the Mariners' Triple A team in Salt Lake City, hitting .317 and slugging .543 in 69 games at the age of 22. In 1986, he became only the second player in major league history to hit two walk-off grand slams in a season; Cy Williams had been the first with the 1926 Philadelphia Phillies, and the next player to do so would be Steve Pearce of the 2017 Toronto Blue Jays. The first of the two was hit on Opening Day, April 8th, off Ken Forsch of the California Angels, to give Seattle an 8-4 win, his second long ball of the game. The next player to hit a walk-off slam on opening day was Matt Olson of the 2020 Oakland Athletics.

He was traded to the Atlanta Braves by the Mariners after 1989 season when they finally decided Edgar Martinez could do the job at third base. Presley was the Braves' starting third baseman in 1990. He had a typically solid season, hitting .242 with a career-high 34 doubles and 19 homers in 140 games, but he only played 20 more games in the majors after that, with the San Diego Padres in 1991, earning his release in June of that season.

After his playing career, Presley was hitting coach for the Lethbridge Black Diamonds in 1996, the South Bend Silver Hawks in 1997 and the Arizona Diamondbacks from 1998 to 2000. After managing the Missoula Osprey in 2004, he was named hitting coach for the Florida Marlins for the 2006 season. He kept the position until June 23, 2010, when he was fired at the same time as manager Fredi Gonzalez and bench coach Carlos Tosca. In 2011, he was named batting coach of the Baltimore Orioles, keeping the job until the end of the 2014 season. Presley became hitting coach of the Round Rock Express in 2016-2017.

Presley completed his education after starting to play professionally, earning a a master's degree in educational leadership and a bachelor's degree in health, leisure and sports from the University of West Florida.