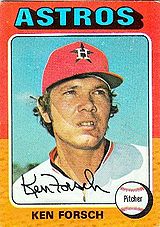 The brother of Bob Forsch, Ken Forsch pitched sixteen seasons in the majors and recorded 114 wins. He and his brother are the only siblings in big league history to both throw no-hitters.

Selected by the Houston Astros in the 18th round of the 1968 amateur draft, Forsch went 17-8 with a 1.96 ERA for a pair of minor league clubs in 1970 to earn a September call-up. He was with the big league club for good in 1971, and he split the next three seasons between the rotation and bullpen before moving primarily to relief in 1974. In 1976, he recorded 19 saves and pitched in the All-Star Game.

Back in the Astros rotation in 1979, Forsch threw a no-hitter against the Atlanta Braves in his first outing of the year on April 7th. The following year, his team won the NL West title, and he made two appearances in the NLCS against the Philadelphia Phillies, taking the loss in Game 1.

Prior to the 1981 season, Forsch was traded to the California Angels for shortstop Dickie Thon. He went 11-7 with a 2.88 ERA and again appeared in the All-Star Game that summer. In 1982, he recorded a career-high 13 wins. After missing the entire 1985 season, he came back briefly for the Angels in 1986. Following his release by California, he pitched in the minors for the Seattle Mariners later that year before ending his playing career.

Both he and his brother Bob pitched 16 years in the majors, with approximately 500 appearances.

Following his playing days, Forsch worked for many years in the Angels front office. From February 1998 to October 2011, he was Assistant General Manager until his dismissal following GM Tony Reagins' resignation.