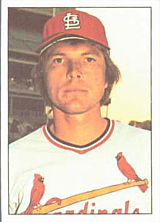 "Most people don't realize how much of a professional Bob was, and how much of a mentor he was to me and a number of other young players. Bob had a wonderful blend of being an absolutely nice human being but also knowing what was right and being stern when he had to be." - Ricky Horton

The younger brother of Ken Forsch, Bob Forsch pitched 16 seasons in the majors, mostly with the St. Louis Cardinals, winning 168 games. He pitched two no-hitters in his career, and he and Ken are the only set of brothers to both throw official no-nos.

Selected by the Cardinals in the 26th round of the 1968 amateur draft, Forsch did not make his pro debut until 1970 (the same year Ken reached the majors). He made it to the big leagues with St. Louis midway through the 1974 season and soon became a mainstay in the club's rotation. He went 20-7 for the team in 1977, and the following year, on April 16, 1978, threw a no-hitter against the Philadelphia Phillies.

Forsch recorded 15 wins to tie Joaquin Andujar for the club lead in 1982 as the Cardinals won the NL East crown. He threw a shutout against the Atlanta Braves in that fall's NLCS but recorded a pair of losses in the World Series versus the Milwaukee Brewers (his team won anyway). In 1983, on September 26th, he hurled another no-hitter, facing the Montreal Expos. He continued to be a part of the St. Louis rotation for much of the 1980s, pitching again in the World Series in 1985 and 1987. The Cardinals lost both series.

Late in the 1988 season, Forsch was dealt to the Houston Astros for Denny Walling. The next year, on August 3rd, he had one of the lowlights of his career, giving up 10 earned runs on 18 hits in 7 innings of relief work against the New York Mets. He relieved Jim Clancy, who had failed to retire a batter in the 1st, and gave up 9 straight hits before closing out the inning, in which the Mets scored 14 runs against the two veteran pitchers. He was the last major league pitcher to allow 9 consecutive hits until David Price did so for the Detroit Tigers in 2014. He retired after the season.

With 163 wins in a St. Louis uniform, Forsch is the third-winningest pitcher in team history through 2019, trailing Bob Gibson (251) and Jesse Haines (210). The most similar pitcher, according to the similarity scores method, is Paul Splittorff. The two were contemporaries, and Paul won 166 games. Paul also won 20 games once and pitched most of his career for one team as well. Their career ERAs were also virtually the same, and Paul died less than a year before Forsch. The main differences between the two were that Bob was right-handed and pitched all of his career in the National League, while Splittorff was left-handed and pitched entirely in the American League.

Forsch and brother Ken also had similar careers, each playing 16 years in the majors. While Ken had 521 appearances compared to Bob's 498, more of Ken's were in relief. The two also both pitched for Houston, but not at the same time. Bob was in the World Series three times, while Ken never appeared in the Fall Classic. Ken was a two-time All-Star, while Bob was never selected to the midsummer classic.

After his playing days, Forsch was the pitching coach of the Billings Mustangs from 2009 to 2011. A week after throwing out the first pitch before Game 7 of the 2011 World Series at Busch Stadium, Forsch died of a chest aneurysm at his home in Florida. He was 61. Ironically, he was filling in for his long-time manager, Hall of Famer Whitey Herzog, at the World Series, as Herzog was recovering from surgery and did not receive medical clearance to be at the game.

"I'll remember Bob Forsch on a more personal level: quick with a good-natured jab (delivered with a devious twinkle in his eye), refreshingly honest, never short on an opinion. Forsch was a cut-through-the-bull kind of man, and I liked that very much. A guy's guy all the way." - Sportwriter Bernie Miklasz, writing in StLtoday.com, November 4, 2011