Note: This page links to Hall of Fame pitcher Bob Gibson. For the major league pitcher who played from 1983 to 1987, click here.

". . . he was at his most ferocious when the spotlight shined brightest." - sportscaster Larry Schwartz

"I guess I was never much in awe of anybody. I think you have to have that attitude if you're going to go far in this game." - Bob Gibson, speaking with Roger Angell 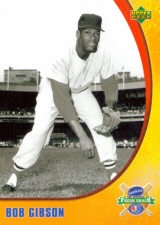 Bob Gibson was one of the last of his breed, a tough, durable pitcher who used intimidation to dominate hitters through most of the 1960s; he was also the first of another breed: the modern strikeout pitcher who threw 20 or more complete games seven times.

He went 156-81 from 1963 to 1970, including one of the best seasons a pitcher has ever had in 1968: 22-9, a 1.12 ERA and 13 shutouts. That performance won him both the MVP Award and Cy Young Award that season. He also won seven consecutive World Series games, pitching in the Fall Classic in 1964, 1967 and 1968. He was on the winning team the first two times, winning three games against the Boston Red Sox in 1967 and was named World Series MVP both of those years. He pitched a shutout and struck out 17 batters - a record which still stands - in Game 1 of the 1968 World Series. All three series went the distance, but he was the loser against Mickey Lolich of the Detroit Tigers in Game 7 of the 1968 Series. In 1967 and 1968 he made 26 consecutive quality starts, setting a major league record that stood until matched by Jacob deGrom in 2018-2019.

Bob Gibson was a basketball star at Creighton University in his hometown of Omaha, NE and in fact attended the college on a basketball scholarship. He averaged 20.2 points per game in three years. Although quite a few players out of Creighton have come to the majors, Gibson was at Creighton during a period (1954-1957) when there were no other future major leaguers - from 1932-1970 he was the only future major leaguer there.

He was signed by the St. Louis Cardinals in 1957 and spent much of 1957 to 1960 in the minors, posting a record of 25-25. He delayed the start of his baseball career to spend the 1957-58 winter playing basketball with the Harlem Globetrotters, where his trademark was the backhanded dunk. He left basketball after that season to concentrate on baseball full-time and broke into the majors in 1959, posting a 3.33 ERA on a team whose ERA was 4.34. At age 23, he was 15 years younger than teammate Stan Musial and two years older than teammate Curt Flood.

Gibson first achieved prominence in 1961 when his 3.24 ERA was fifth-best in the National League. He first made the All-Star team in 1962 and first had 200+ strikeouts in a season that same year. His first Gold Glove was in 1965.

''I faced Bob Gibson, Whitey Ford, Frank Lary, Jim Bunning, Ralph Terry and Mudcat Grant—all the top pitchers of that period, and Gibson was by far the best pitcher I ever saw, without question. When he was on his game, which was most of the time, he was unhittable." - Bob Roselli, quoted here [1]

He pitched an incredible 28 complete games in both 1968 and 1969. The mound was lowered for the 1969 season, in large part because of Gibson's dominance that gave 1968 the nickname "The Year of the Pitcher". Gibson continued to pitch successfully after the mound was lowered, throwing a no-hitter on August 14, 1971. In another memorable feat, on June 17, 1970, he struck out a batter in every inning of a game; no Cardinal pitcher would match that until Adam Wainwright in 2013. He was the second pitcher in major league history to record 3000 strikeouts, joining Walter Johnson in the exclusive club in 1974. There have since been a large number of pitchers who passed the milestone. He started losing his effectiveness in the mid-1970s and retired during the 1975 season, having played his entire big league career in St. Louis.

Gibson was elected to the Baseball Hall of Fame on January 15, 1981 by the Baseball Writers Association of America.

His first Baseball Card appearance was in the 1959 Topps set.

"Have you ever thrown a ball 100 miles an hour? Everything hurts. Even your ass hurts." - Bob Gibson

"Bob wasn't just unfriendly when he pitched. I'd say it was more like hateful." - Joe Torre