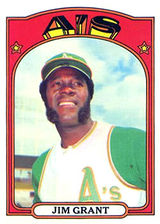 Mudcat Grant was one of the first black pitchers to become a Major League star. He reached his peak in 1965 when he went 21-7 with the Minnesota Twins, with two additional wins in the 1965 World Series.

Jim Grant was born in 1935 in Lacoochee, a small town of 500 persons in central Florida. He grew up in a family of nine children held together by his mother Viola, who was employed in a sawmill, after Grant's father died when he was still a young kid. He was a reserve running back and third baseman in college [1]. He signed his first contract at the age of 18 with the Cleveland Indians organization, his only bonus being a handshake. He pitched in the minors from 1954 to 1957 and found success right off the bat, winning 21 games for the Fargo-Moorhead Twins in the Northern League in 1954, and going 19-3 for the Keokuk Kernels of the Three-I League in 1955 and 18-7 for the San Diego Padres of the Pacific Coast League in 1957.

On June 15, 1964, Mudcat Grant was traded to the Twins in return for Lee Stange and George Banks and a significant amount of cash. Grant later said that the Indians seemed to have been embarrassed by the deal and no one in the front office wanted to tell Grant about it; it was up to the clubhouse assistant to inform him why his equipment was no longer in the locker room. The Twins made out like bandits in the deal, as Grant collected 11 wins in 26 games with a 2.82 ERA for his new team. But this was just a beginning, as 1965 turned out to be a dream season. He went 21-7, 3.30 and returned to the All-Star Game. On September 25th, he threw a one-hitter against the Washington Senators to become only the third black pitcher to win 20 games in a season, following Don Newcombe who had done so for the Brooklyn Dodgers in 1951, 1955 and 1956 and Sam Jones in 1959. Grant was the first to achieve the feat in the American League, however, and on October 3rd of the same year, Bob Gibson of the St. Louis Cardinals joined the exclusive club when he earned his 20th. To this day, only 15 black men have been twenty-game winners, and Grant was active in promoting links among them through the "Black Aces Club" and a charitable foundation linked to it. On October 6th, Mudcat started Game 1 of the World Series and threw a complete game to beat Don Drysdale of the Los Angeles Dodgers, 8-2. The same two pitchers met again in Game 4 on October 10th in Los Angeles, but this time Drysdale came out on top by a 7-2 score. Grant came back to start Game 6 on October 13th, with the Twins facing elimination at home, and this time he beat Claude Osteen with a six-hit complete game and hit a three-run homer in a 5-1 win. However, the Dodgers won the deciding Game 7 the next day to take the Series.

Grant pitched two more seasons for the Twins before being traded to the Dodgers after the 1967 season in a blockbuster deal involving former MVP Zoilo Versalles in return for Johnny Roseboro, Ron Perranoski and Bob Miller, a trade that would be a huge win for the Twins. He moved to the bullpen for the Dodgers in 1968 and pitched well, going 6-4, 2.09 with 3 saves, but only 35 strikeouts in 95 innings. The Dodgers then left him unprotected for the expansion draft in October and he was selected by the Montreal Expos with their 18th pick. He was already a well-known figure in Montreal, as he had visited the city's famous night clubs many times in previous winters with his jazz band called "Mudcats and the Kittens". In fact, his dabbling in jazz in the off-seasons was one of the reasons the very conservative owner of the Twins, Calvin Griffith, who disapproved of such dissolute pastimes, traded him to the Dodgers a year earlier.

The newly-formed Expos wanted to make Mudcat Grant the anchor of their pitching staff. He was picked to start the team's first-ever game, on April 8 1969 at Shea Stadium in New York. Things did not go too well: he escaped a jam in the 1st inning, then gave up a base-clearing double to Tommie Agee with one out in the 2nd to earn a quick hook from manager Gene Mauch and did not figure in the decision when Montreal won the game, 11-10. He won his next start, but then proceeded to lose six of his next seven games to fall to 1-6. He was booed at home on May 15th for failing to run out a ground ball against the Houston Astros, lost his spot in the starting rotation, then on June 3rd was traded to the St. Louis Cardinals for Gary Waslewski. He pitched much better for his new team, going 7-5 over the rest of the season while pitching mainly out of the bullpen; he did pitch a complete game victory over his former teammates on June 25th in Parc Jarry in one of the last starts he would make.

Starting in 1970, he had two very good seasons as a closer first with the Oakland Athletics, then with the Pittsburgh Pirates. He saved 24 games in 72 outings for the A's in 1970, making him one of only seven pitchers in history to record seasons of both 20 wins and 20 saves. He pitched a total of 123 innings, going 6-2, 1.82, during that dominating stint, then was sent to Pittsburgh for the last weeks of the pennant race on September 15th. He won two more games in 8 appearances as the Pirates won the NL East title, but he was not eligible for postseason play. Interestingly, because of his season split between leagues, he did not lead either league in appearances, but did lead the major leagues with his 80 games pitched. He started the 1971 season with the Pirates, going 5-3, 3.60 with 7 saves in 42 games while pairing up with Dave Giusti in the bullpen, then returned to the A's on August 10th. He was 1-0, 1.98 with 3 saves for his second team, and this time was eligible to play in the ALCS against the Baltimore Orioles. On October 5th, he pitched the last two innings of Game 3 without giving up a run, but the Orioles won, 5-3, behind Jim Palmer to complete a three-game sweep. This would be Grant's last outing in the Major Leagues. He did pitch another season in AAA, going 5-5 in 49 games in relief for the Iowa Oaks in 1972 before hanging up his cleats for good.

In addition to his off-season musical group, Grant was regularly asked to sing the National Anthem before games. Performances include singing the anthem in uniform on opening day for the A's in 1970, and again, in civilian clothes before Game 2 of the 1970 NLCS for which he was not eligible. He also had the honor to do so on opening day for the 1975 Cleveland Indians, coinciding with Frank Robinson's first game as the first African-American manager in major league history. He also was a writer, notably authoring a poem called "Life" which compares life to baseball, and writing a book on the aforementioned "Black Aces".

Mudcat Grant was a television broadcaster for the Cleveland Indians for a number of years starting in 1973. He also worked on broadcasts for the Dodgers and Athletics. He was involved in a number of other baseball-related roles, serving on the board of the Negro Leagues Baseball Museum, on the Baseball Assistance Team and on the Major League Baseball Alumni Association. He was a forceful and colorful speaker who regularly gave talks on his baseball career and on how his strong faith in God helped him. He had to deal with diabetes, arthritis and knee problems over the years, but these did not detract from his legendary good humor and generosity.