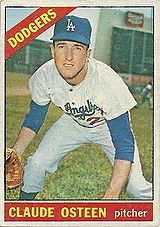 Claude Osteen was a long-time successful pitcher who initially broke the heart of Los Angeles Dodgers fans by coming to the team in a trade that moved fan favorite Frank Howard to the Washington Senators. However, he had such success with the Dodgers that the fans forgave him, and even when he was traded in 1973, he helped the Dodgers by bringing Jim Wynn to the team in exchange.

Osteen was signed by the Cincinnati Reds and pitched in the majors in 1957 while he was still 17 years old. He appeared in 3 games and had a 2.25 ERA. He did not come back until he was 19, and was not successful in cups of coffee in either 1960 or 1961. The Reds of 1961 were a miracle team, winning the pennant after finishing 6th the previous year, but Osteen only made one appearance with them and was traded to the Senators in September. The 1961 Reds were a team full of young pitchers (among them, Jim O'Toole, 24, Joey Jay, 25, Jim Maloney, 21, and Ken Hunt, 22), so Osteen was expendable.

Osteen became a starter for the last-place Washington Senators in 1962. Although he had initially come up 5 years earlier, he was still only 22 years old. While his winning percentages were not impressive, his ERAs were below the league average in both 1962 and 1963. In 1964 he went 15-13 on a team that lost 100 games, and the Dodgers traded Frank Howard to get him. Howard, who was 27 in 1964, had come off an unimpressive season, but was to go on with the Senators to lead the league twice in home runs.

Osteen joined the Los Angeles Dodgers for the 1965 season, when they won the World Series. Osteen's regular season record was only 15-15, but he pitched well in the World Series, giving up only one earned run in 14 innings against the Minnesota Twins. Osteen also appeared in the 1966 World Series with the Dodgers, giving up one earned run in 7 innings against the Baltimore Orioles, but ending up on the wrong end of a 1-0 loss.

He was a heavily used starter for 9 years with the Dodgers, typically starting close to 40 games each year, and both winning and losing in double figures. In 1972 he went 20-11, but it was more typical to see him go 16-14, which he did in 1970. He was a consistent arm in the rotation at a time when the Dodger team changed significantly. He joined the Dodgers a year before Sandy Koufax retired and a year before Don Sutton came up as a rookie. He continued with them after Don Drysdale retired, and was still a starting pitcher when youngsters such as Steve Garvey, Ron Cey, Bill Buckner, and Davey Lopes joined the team. He outlasted Maury Wills, who had been traded from the Dodgers after the 1966 season, came back in 1969, and retired after the 1972 season.

Finally, after the 1973 season, the Dodgers traded Osteen for Jimmy Wynn, who was probably the real MVP on the 1974 Dodgers rather than Garvey, who won the award. Osteen pitched most of a season for Houston in 1974, was traded to St. Louis in August, and finished up with the Chicago White Sox in 1975, a team that featured two other veteran workhorse pitchers - Wilbur Wood and Jim Kaat.

Never a factor in Cy Young Award voting, he was nevertheless a three-time All Star. He finished with 196 victories and 195 losses, and a 3.30 lifetime ERA during what was largely a pitcher's era. The most similar pitcher, according to the "similarity scores" method, was Curt Simmons, a National League contemporary who also appeared in 3 All Star games but never figured in the Cy Young Award voting either.

Two of his sons, David Osteen and Gavin Osteen, pitched in the minor leagues.