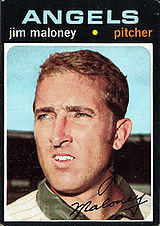 "The only thing I knew about him was when he popped up on the scoreboard in Cincinnati, 'This Day in Reds History'. Seems like he is in every other one — Jim Maloney threw 10 shutout innings; Jim Maloney threw another no-hitter; Jim Maloney struck out 25 or something." - Homer Bailey, describing what he knew about Maloney before meeting him

Jim Maloney was one of the biggest pitching stars of the 1960s, winning 20 games twice and 134 overall in his career. His forte was the strikeout: he ranks #25 on the all-time list for strikeouts per nine innings. He was known as one of the hardest throwers of his time.

Maloney was a top shortstop prospect at Fresno High School where the pitching star was future major leaguer Dick Ellsworth. However when he worked out with the Cincinnati Reds, scout Bobby Mattick was impressed with his arm and gave him a huge $100,000 bonus to sign as a pitcher.

Maloney threw two no-hitters, both while with the Reds. The first, on August 19, 1965 at Wrigley Field against the Chicago Cubs, was a 10-inning affair. Despite not allowing a hit, Maloney was in trouble most of the game because of walks. His mound counterpart, Larry Jackson, held the Reds to just 1 run - a solo homer by Leo Cardenas in the 10th - and Maloney walked 10 batters. He also struck out 12, and threw a total of 187 pitches that day.

The second, on April 30, 1969 against the Houston Astros at Crosley Field, was a tidier effort. Maloney only walked five (and struck out 13). His glory was short-lived, however. The next day, the Astros' Don Wilson no-hit the Reds, with an almost identical line (6 walks, 13 strikeouts).

He almost had a third one: on June 14, 1965, he pitched 10 no-hit innings against the New York Mets before allowing a lead-off homer to Johnny Lewis in the 11th and ending up a 1-0 loser. He tied a National League record with 18 strikeouts in an extra-inning game while walking only one that day.

In his second start of the 1970 season, Maloney severed his Achilles tendon while running the bases. He never fully recovered from his injury, keeping him from ever returning to form. The injury effectively ended his career, as he sported a 134-80 record, 3.08 ERA, and two no-hitters prior to 1970 and a 0-4 record with a 7.28 ERA in 1970 and 1971, spending that final season with the California Angels.