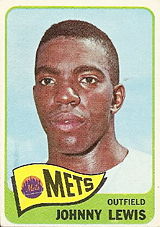 Lewis hit .245 in 1965, on a team whose overall batting average was .221. His 15 homers were tied for third-best on the team. Lewis is remembered for hitting a home run in the 11th inning of a game on June 14th to beat Jim Maloney of the Cincinnati Reds, who had pitched ten no-hit innings until then.

Lewis had broken in on the St. Louis Cardinals in 1964, a team which won the 1964 World Series. He was a year younger than fellow outfielder Lou Brock. Lewis did not appear in the Series.

He slugged over .500 several times in the minors.

In 1999-2001, Lewis was the Houston Astros minor league hitting coordinator. After the 2001 season, he was named roving hitting instructor by the Astros.